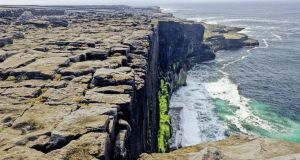 A view of cliffs on Inis Meáin, one of the Aran Islands. Photograph: Getty Images

Inis Meáin’s primary school has been saved from imminent closure but it has taken the intervention of an insurance company to secure the necessary funding to employ a second teacher to keep its doors open.

Recent changes made by the Department of Education to school staffing ratios meant that the only primary school on the island currently has just one teacher because the department only covers the cost of two teachers if a school has 20 students.

The little schoolhouse on Inis Meáin could only muster nine. So the State would only fund one teacher.

Her name is Orlaith Breathnach and in the coming year she expected to teach nine children aged four to 13 spread over seven different classes. She also anticipated having to supervise all play times without any break between 9am and 3pm.

Four of the students who are starting next week do not have any Irish. One – who comes from Belarus – does not speak Irish or English.

The school held a public meeting in Dublin last month to highlight its plight and the threat of closure. Ms Breathnach told that meeting the school could not remain open with just a solitary teacher and she cited health and safety issues as well as insurance problems.

At the meeting parents of existing pupils said they would have no choice but to leave the island to get adequate schooling for their children unless a second teacher was appointed.

While the meeting was well attended by politicians, the wheels of bureaucracy turn slowly and with no sign of the Department of Education preparing to make an exception to its rules for the island community, things were not looking good for the school.

However after the meeting and the ensuing publicity, Zurich Insurance pledged to help fund a second teacher for two years as part of its ‘Investing in Communities’ programme.

“Inis Meáin is a stronghold of the Irish language. The language, and the very sustainability of the island, is under threat if families there cannot avail of a good level of education for their children” said Zurich EMEA’s chief executive Patrick Manley.

“The case for the reinstatement of an additional teacher at the primary school on Inis Meáin is a strong one.”

He said the community on Inis Meáin had embarked on a campaign to secure support for the appointment of a second teacher for the national school and he added that “in recognition of the importance of the Irish language, the educational needs of the children on the island, and indeed the very future of the fabric of the island community, Zurich is proud to be able to step in and pledge our support for the appointment of a teacher for two years.”

He expressed hope that a longer term solution could be put in place.