Half of girls believe science and maths are ‘too difficult’ 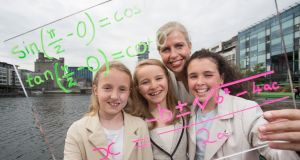 Maria Mallin (10), EU Digital Girl of the Year 2014 Lauren Boyle (10), Paula Neary, client director at Accenture Ireland and author of the report, and Chloe McArdle (10) at the launch of the “Continuing to Power Economic Growth: Attracting more women into Science and Technology 2.0” report. Photo: Naoise Culhane.

Biology is the most popular science subject among both girls and young women, while physics is the least popular, according a survey which raises fresh concerns about gender stereotypes in academia.

The study by Accenture, which explores how to attract more women into STEM (Science, Technology, Engineering and Mathematics) careers, recommends greater links between industry and schools to challenge gender-related perceptions among girls, their parents and teachers. In a survey of over 500 girls and young women, 48 per cent said science and maths were too difficult.

Asked what STEM subject they would most like to study or to have studied, girls and young women picked biology (43 per cent) first, followed by maths (39 per cent) second and computer science (38 per cent) third.

Girls aged 11-18 years were more likely to choose physics (31 per cent) than those aged 19-23 years (22 per cent), indicating some may be turned off the subject at secondary level.

The study notes that 10 years ago, 47 per cent of students entering STEM courses at university were women, but this had slipped to 40 per cent in 2013. In the same year only 16 per cent of entrants into computer science were women.

“Difficult subject syllabus, lack of information around subjects and the perception that these subjects are more suited for boys are the main reasons for not wanting to study STEM subjects,” the report states.

n80 per cent of girls and young women believe that studying STEM subjects creates a lot of career opportunities;

nSix in seven parents say they feel ill-informed on the different career opportunities which exist for their daughters.

Paula Neary from Accenture said many of the barriers to women entering STEM careers “are based on unfounded perceptions and stereotypes”.