Fundraising efforts led to discovery of Kennedy letters at All Hallows

Connection between Kennedy’s and college known for many years 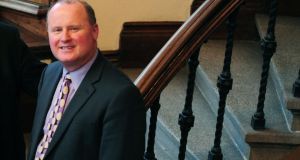 College president Fr Patrick McDevitt: Shortly after his arrival an investigation of the college’s archive and library was begun to see what might be disposed of to raise funds.

Since the arrival of its new president, Fr Patrick McDevitt, towards the end of 2011 a concerted effort has been made at All Hallows College in Dublin to address funding issues and attract more students.

Some months later, early in 2012, former government secretary general Dermot McCarthy was appointed chairman of the college’s board of governors.

A college of Dublin City University, All Hallows enrols about 600 full and part-time undergraduate and post-graduate students with about 1,000 students there altogether a year.

As its director of marketing, communications and public relations, Carolanne Henry, told The Irish Times yesterday the college “is facing similar challenges to others in the third level landscape nowadays.”

The planned auction of the Jackie Kennedy letters “would have been one of the building blocks we were looking at” towards a better future, she said. Vincentian priest A Vincentian priest, raised in Chicago and an Irish- American, Fr McDevitt had been associate professor in Chicago’s DePaul University College of Education, with its 25,000 students, when named the first American-born president of All Hallows. Shortly after his arrival an investigation of the college’s archive and library was begun to see what might be disposed of to raise funds.

Interview In a May 2012 interview with him at All Hallows, conducted for the New York-based Irish Central website by journalist Bernadettte Masterson, she wrote of: “An old, slightly faded, Christmas card which hangs on the wall of Dr McDevitt’s office hints at another link between All Hallows and the USA. The card is handwritten to a Fr Joseph Leonard and signed by Jacqueline Kennedy and her husband, John F Kennedy. ”

She recalled letters and books sent by Fr Leonard to Mrs Kennedy and the visit by the Kennedys to All Hallows in 1955.

She concluded: “A photograph of the Kennedy couple is proudly displayed at All Hallows College. And the Christmas card on the wall facing Dr McDevitt’s desk serves as a poignant reminder of the human connection between two countries whose histories are so deeply intertwined.”

There was no reference to any letters sent by Jackie Kennedy to Fr Leonard.