Free speech should reign on campus

Opinion: Bad ideas don’t disappear just because we would rather not listen to them 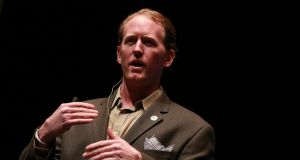 Recently the media has focused on events in British and American universities in which students appear to be hostile to freedom of speech. It might surprise some to know that unfavourable views towards freedom of speech are quite popular in university campuses in Ireland too.

In September, Trinity College Dublin held a debate on whether freedom of speech should include the right to offend. The house voted against the motion. In addition to this, a university event that hosted Robert O’Neill (the man reputed to have killed Osama bin Laden) sparked controversy online, with some students saying he shouldn’t be given a platform.

When you consider the discrimination that exists in our society, the idea of holding up free speech as an absolute might appear to be a detached view that does not take into account the experiences of those who suffer from oppression.

Often when you observe those who argue in favour of censorship, free speech is regarded as a value not worth upholding. However, this right is essential for social justice movements to grow and prevail in their aims.

The students who took part in the Free Speech Movement at the University of California, Berkeley, in 1965 recognised this when they protested so that political groups that offended common orthodoxies would be able to campaign openly in the university.

In Ireland, content that went against the teachings of the Catholic Church was once censored. This atmosphere might have played a role in getting the Eighth Amendment enshrined in our Constitution as other countries were liberalising their abortion laws.

Traditionally, those who have argued in favour of censorship have been on the right of the political spectrum. The desire of those on the left to censor those they disagree with has been a recent development.

Growing up as a teenager after the Columbine shootings, most of the arguments for censorship came from US Republicans and the Catholic Church. These groups demanded censorship on the grounds that violent and sexualised content would corrupt society.

Oddly, many of those who think they are on the side of social justice are now the ones who argue that there is a causal link between art and injustice in real life. At the UN, religious groups argued for states to uphold blasphemy laws because criticism of their religion offended them.

While members of the authoritarian right took offence for different reasons, many of the underlying points are the same as those espoused by students on college campuses: people can’t be trusted to consume certain content, and questioning the beliefs of certain groups is so offensive it should be off-limits.

If this freedom from offence had been embraced in the 1970s and 1980s, grassroots movements such as the campaigns for LGBT rights would not have been able to make headway.

Rosa Luxemburg recognised that without freedom of expression and the guarantee of freedom to dissenters, bureaucracy becomes the deciding factor.

Creating a culture in which anyone from right-wing rabble rousers to the “wrong type” of feminists can be censored will stifle the growth of social justice movements in the future. It will create an environment in which orthodoxies cannot be challenged in the fear that they may offend someone.

Bad ideas do not go away just because students don’t want to listen. Politicians such as Nigel Farage and Donald Trump have risen to prominence, in part because their supporters are unaware of good counterarguments to their anti-immigration messages.

Negative political views grow and fester because people don’t espouse their views publicly for the fear of persecution. But if views are silenced instead of refuted, people will simply harbour such views secretly. This is how phenomena such as “the silent Tory” develop. It is understandable that people can reach a false conclusion if they are unaware of information that counteracts their position. Robert Dunne is a master’s student at UCD