Opinion: The State surely has a duty to offer parents access to secular education for their children 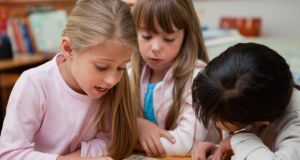 My son, who will be four years old in March, is not baptised. He has been rejected from all four national schools in our area – Dublin 6.

I put his name down for all of them, two of them religious schools, when he was a baby.

The little Church of Ireland school, which is the nearest one to our home, has had his name on its application list since he was six weeks old. In its letter last month the board of management “regrets to inform” me that my application has been “unsuccessful”.

“Your child is currently number 177 on our waiting list . . . All offers of places were made in accordance with the school enrolment policy.”

The criteria according to which children can get in the queue are then set out. There are 11 categories, the first being “Church of Ireland children of the [local] parishes,” followed by “COI siblings/Protestant siblings” followed by COI children from outside the parishes. Next in are COI children from inter-church marriages, then other Protestant children, then other siblings, then children of inter-church marriages where the child is not COI, children of staff, Roman Catholic Children, Orthodox children and last, the category into which my son falls,
“other children”.

This school will take any child of almost any faith from anywhere in the country before they will take an unbaptised child living around the corner.

The Roman Catholic school is a little further away. My son is 117th on the waiting list. His name has been down since he was a baby, but date of application is not relevant there, the principal told me. The letter turning him away from there said siblings of current pupils were prioritised. This is understandable and “all 17 such applicants are being offered places”.

“The remaining 17 places are being offered to Catholic children resident within the Catholic parish . . . We regret that we are unable to offer your child a place in our junior infant class for 2014.”

The waiting game
The other two other schools, one a non-denominational Gaelscoil and the other multi-denominational, should surely be more welcoming and as I had his name down with the multi-d since he was three weeks old I was hopeful. However when I called I was told he was “about 220th on the list”. The enrolment secretary told me parents travelled from across Dublin to enrol their children there, such is the demand. Again at at the Gaelscoil, with parents travelling from across the city to get their kids in, he’s 239th on the waiting list.

There is clearly huge demand for school places in Dublin 6, not helped by parents – including myself – applying to several schools, and this affects all families. What is also clear however is that denominational or faith schools’ enrolment criteria impact in a gross and disproportionate way on children such as my son, by excluding them simply because they have not been baptised. To be clear, these State-funded faith-schools – which account for 96 per cent of primary schools – are allowed to direct a religiously based exclusion at children as young as four. This is unacceptable. It is particularly heinous in a democracy which describes itself as a Republic.

Is it any wonder that every single one of my friends who has children has had them baptised – and not one of them to my knowledge attends church outside such events as weddings, funerals or first Holy Communions?

The Irish State has been repeatedly castigated for allowing this discrimination against children to continue, by the United Nations in 2006, 2008 and again in 2011, when its Human Rights Committee noted with concern that the dominance of denominational education was “depriving many parents and children who so wish to have access to secular primary education”.

In 2011 the Irish Human Rights Commission called on the Department of Education to end schools’ religious discrimination against children in admission policies.

In no other area of society, where a public service is funded by taxpayers is such discrimination permitted. One can only imagine the outcry if a public hospital announced it would only treat ill Catholics; or if the local Garda station announced it was only going to investigate crimes committed against people of faith.

The churches controlling our schools argue that their ethos requires special protection. The Equal Status Act 2000 protects their right to protect their ethos of exclusion. Although religion is named as one of the nine grounds of discrimination illegal in public life, section 7 allows schools to exclude children if “it is proved that the refusal is essential to maintain the ethos of the school”.

No, Minister
In September the Minister for Education, Ruairí Quinn, launched a public consultation on inclusiveness in primary schools. He said: “Schools should be welcoming places for all children from the local community. We all know that Irish society has changed a lot in recent years.

Our education system needs to adapt, to make sure that, as well as continuing to cater for children with more traditional religious beliefs, there is also respect for children of different traditions and beliefs.”

However, his department is also consulting on a new Education (Admissions to Schools) Bill, the draft of which maintains schools’ right to keep out children with the ‘wrong’ religion, or none.

Yesterday the Ombudsman for Children published her advice on the Bill.

She says: “... no child in general should be given preferential access to publicly-funded education on the basis of their religion”, subject to limited exceptions and with the Minister’s permission.

Mr Quinn is legally obliged to vindicate the right, possessed by every child, to their education. Schools are places for numbers and letters, not for icons.