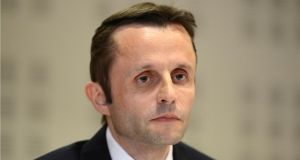 Dr Geoffrey Shannon: he champions a “whole-school” counter to cyberbullying incorporating policies, codes of behaviour, education on social media and the involvement of parents

The Special Rapporteur on Child Protection has said firmer laws against cyberbullying are now required in the wake of the Louise O’Keeffe ruling which may have serious implications for school liability.

Dr Geoffrey Shannon, whose role is to monitor international legal developments in the field of child protection, has said criminalising children should be a last resort, but an ultimate sanction.

He said a renewed sense of urgency had arisen following the O’Keeffe judgment at the European Court of Human Rights which last January held the State liable for sexual abuse she suffered while in national school.

Existing laws, he said, were drawn when many advancements, for example cloud computing, were not even conceived of. He will include his recommendations in a report to the Oireachtas later this year.

“This decision of the European Court of Human Rights [regarding Ms O’Keeffe] may have very significant implications for the liability of schools for injury caused by bullying.”

Dr Shannon believes a key question arising from the judgment will relate to whether a school was aware of the problem and if it acted appropriately to protect the children involved. He champions a “whole-school” counter to cyberbullying incorporating policies, codes of behaviour, education on social media and the involvement of parents.

These measures, along with intervention programmes that can reduce bullying incidents by 20 per cent, should have the backup of legislation.

Speaking to The Irish Times on this point, he said: “My own view is that you should avoid criminalising a child. I would be at pains to emphasise that careful consideration should be given to when behaviour is considered criminalised.” This, he said, should be the “ultimate sanction with a number of intervening steps [beforehand].”

Currently, legislation relied upon for tackling cyberbullying is the Non-Fatal Offences Against the Person Act, 1997 and the Post Office (Amendment) Act, 1951, although both of these are problematic and fail to keep pace with changing technology.

Dr Shannon said an ideal situation would also include an agreement of co-operation between internet service providers and other entities such as Facebook for the provision of internet protocol (IP) addresses to gardaí identifying suspected offenders in the event of criminal complaints. He has also recommended a “clear system of legal recourse . . . to provide for an offence of cyberbullying and to encourage victims to come forward, anonymously if needs be, without fear of retribution.”