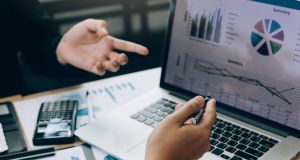 In any given year it can be estimated that up to 25 per cent of all incoming first-year students sat the Leaving Cert in a year prior to the current one. Photograph: Getty

It is worth bearing in mind that the percentage number listed in the last column of the main Feeder Schools table does not represent a “true rate” for the progression of Leaving Cert 2020 students to college this year as it takes account of a number of different elements.

In the data provided to The Irish Times, each third-level institution includes all incoming first-year students who attended a given school, even though up to 25 per cent of incoming first years may in fact be past pupils and sat the Leaving Cert up to 20 years previously.

Why is this? The government legislated more than 20 years ago to block the publication of current year progression data from our second- level schools. Colleges are only obliged to provide the composite number of past pupils of any school of all ages who commence a degree programme in 2020.

In other words, a 40-year- old past pupil of a given school returning to college this year is included in that school’s numbers, which is then measured as a percentage of the current sixth-year class of 2020.

Who goes to college each year? In any given year it can be estimated that up to 25 per cent of all incoming first-year students sat the Leaving Cert in a year prior to the current one, but due to current policy, they are not differentiated in the data provided by colleges.

Up to 5,000 students who secure college places each year progress from levels 5/6 Further Education programmes.

Alongside these students who have taken Post-Leaving Cert programmes (PLCs) are those who have delayed going to college for a year or more, or have dropped out of another CAO programme in first year or at a later stage in the course and are re-entering another third-level course this year. Those re-entering college for a second time are effectively counted and credited twice to their school.

The Irish Times estimates that for a school where the numbers taking the Leaving Cert remain relatively constant, we can deduct 25 per cent from its published progression rate to calculate the true progression rate of the 2020 class.

But in looking at schools with high college progression (as a percentage of the class of 2019), we can’t ignore the fact that from the data provided to the newspaper that 135 schools have had a significant reduction of 15 per cent or more in the number of students sitting the Leaving Cert in the past year.

For that reason we have excluded from all the smaller tables schools where the number of students in the 2020 class was 85 per cent or less than the number who sat the Leaving Cert in 2019.

Measured as a percentage of the class of 2020, Holy Faith in Clontarf, Dublin 3, appears to send 122 per cent of its students (including past pupils) to college, and the percentage progression for Clongowes WoodCollege, Clane Co Kildare appears to be 108 per cent.

Presentation College, Mardyke, Cork City, recorded a progression rate of 107 per cent in 2020.

So how is it mathematically possible for some schools to continuously record more than 100 per cent attendance of their former students at third-level?

The explanation for this apparent mathematical impossibility is that when a student registers with a college in the CAO system, they are credited to their former school.

If every past pupil of that school eventually undertook a third-level course through the CAO, the total number of students registered would equal the number of former pupils for that period of years.

The only explanation for schools who consistently seem to perform at over the 100 per cent participation rate in CAO college courses is that some of their students are being counted twice, as explained above.

The higher the level of college dropouts experienced by former pupils of any given school, the higher the school’s progression rate will appear as recorded by colleges in the CAO system.The reality of this phenomenon will remain hidden within the progression numbers if the total number of students going to college from any school over a period of years remains significantly below the total number who took the Leaving Cert during that time.

Alongside the problem of over-reporting of progression rates from some schools, our charts can also unfortunately under-report progression. This is due to the unavailability of the relevant data – something that is beyond our control. For example, there has been a major expansion in the opportunities offered to young people leaving second-level through the huge increase in apprenticeship programmes, co-ordinated through the State training agency Solas across a wide range of economic sectors, beyond the traditional construction trades.

Some of these young people graduate with level 8 honours degrees, but are not included in the numbers provided to The Irish Times by colleges, as they do not secure their places through the CAO application process. Furthermore, a growing number of Irish students are seeking and accepting places in continental EU universities, particularly in the Netherlands. The progression charts do not include these students, as The Irish Times does not receive any data in relation to these students.

Similarly, schools in Border regions that traditionally secure places for their former pupils in colleges in Northern Ireland may appear to have lower progressions rates to third-level than they have, as The Irish Times does not have access to that data.

Is it worthwhile presenting you with the data?

The Irish Times has provided the clearest possible picture of the ongoing success of our second-level schools in supporting one of the largest proportions of school leavers across the OECD in progressing to higher education.

This success has transformed our society and economy and facilitated the ongoing development of the economy.

While the tables indicate in broad terms how a school is doing in terms of progression to tertiary-level education, factors such as enrolment policies and geographic location also contribute to the ranking and the publication of this data is not passing judgment on the success or otherwise of any of the schools featured.

The picture painted by the available data, although flawed and incomplete, is still much sought after by parents when considering the important education choices they face regarding their children’s ongoing education