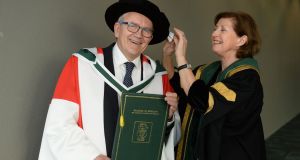 Irish Times education columnist and career guidance counsellor Brian Mooney has been conferred with an honorary degree by the National University of Ireland in recognition of his “exceptional contribution” to Irish education.

He received the honorary Doctor of Education degree, the highest award of the university, at a NU awards ceremony at the Aviva Stadium on Tuesday.

NUI chancellor Dr Maurice Manning said Mr Mooney has provided a great service to students as they contemplate the options available to them on leaving school.

“By clarifying often complex entry requirements, drawing attention to deadlines and specific requirements that might easily be overlooked and giving good advice on programmes and career prospects, he has eased the passage of many students into universities and colleges,” Dr Manning said.

“He has also highlighted the excellent opportunities available in further education and through the new apprenticeships. It’s no exaggeration to say that he has become the face of guidance counselling in Ireland.

Mr Mooney recently retired from Oatlands College, where he was a teacher and guidance counsellor and previously a student.

He was president of the Institute of Guidance Counsellors from 2001 to 2006 and has been writing for the Irish Time since 2002.

In an address at the conferring, Dr John McGinnity of Maynooth University highlighted Mr Mooney’s work in helping to establish the Qualifax.ie website and a professional support service for guidance counsellors.

Through his work in the Irish Times, as well as broadcasting work, he said Mr Mooney has supported “countless numbers of applicants and parents navigate successfully the transition from second level to further and higher education and apprenticeships.”

“It is not an overstatement to say Brian has a presence in thousands of homes through the multiplicity of roles he has had over many years serving the needs of school leavers, guardians and colleagues in the teaching profession,” he said.

At the same event, the NUI granted awards worth more than €1 million to NUI students, graduates and staff across its constituent universities and colleges.

They included Niamh Keady-Tabbal, a first year PhD student in law at NUI Galway who has been awarded a scholarship in honour of the late Peter Sutherland.

Her research focuses on refugee status determination procedures and the relationship between border securitisation and access to international protection in Greece and Lebanon.

Prof Guy Beiner was awarded a NUI history research prize for his book, Forgetful Remembrance: Social Forgetting and Vernacular Historiography of a Rebellion in Ulster.

Dr Catriona Collins, a graduate of NUI Galway, was awarded a postdoctoral fellowship for her research on the complex mechanisms that contribute to bovine male fertility.