Education preview: What’s in store for 2015?

Deeper Sino-Irish relations, an increased emphasis on philanthropy and a teachers’ pay claim are among our predictions for the new year 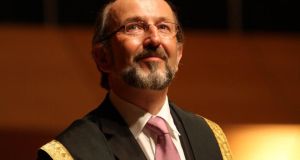 more open and equitable. This row will put the Junior Cycle dispute in the ha’penny place.

Universities and institutes of technology have been falling over each other to sign partnership deals with Chinese institutions. Chinese students are keen to study abroad, and there are not enough college places in China to satisfy demand. Ireland is hoping to position itself as a key European landing point.

As the economy recovers, so does the potential for fundraising. Higher education institutions realise they have to up their game in this respect by investing in alumni relations, and hopefully reeling in a few big fish in the process. TCD hopes to raise €600 million to fund a five-year development plan, which aims to put “entrepreneurship” at the heart of its academic offering.

The report of the Stem (science,technology, engineering and mathematics) education review group, chaired by Prof Brian MacCraith (above),

will reignite debate about teaching priorities. Britain is on a major push to recruit and develop better science teachers, and similar plans are mooted here.

The long-awaited value-for- money review of small primary schools remains under wraps, and many in the Government will hope it stays there until after the general election. But Ireland remains well out of sync with European norms in having so many small schools: 43 per cent of primary schools have fewer than 100 pupils. As Prof John Coolahan (below) recently pointed out, this has implications not just for cost but quality of teaching too.

As the exchequer figures improve, the department may soon find itself able to lift the moratorium on filling vacant middle-management posts. Its officials admit the loss in school leadership is “unsustainable”, and an announcement may be timed to sweeten the pill of the Junior Cycle reforms. Department officials and management bodies are, meanwhile, plotting a new career trajectory for teachers so everyone plays some leadership role in the school.

Evidence emerged this year of colleges manipulating entry points by putting on courses with only a handful of students. An Irish Times analysis showed that more than a third of higher degree (level eight) courses listed on the CAO offered 15 or fewer places. Some 42 course codes were filled by three or fewer applicants. Colleges have pledged to reduce the number of course codes and move towards general entry courses that allow students to choose a specialisation later in their education. But some colleges may not give up without a fight.

Initial discussions are already taking place at a senior level in the public sector unions about a pay claim next year. The teacher unions will have their own views, and another solo run by the ASTI can’t be ruled out.