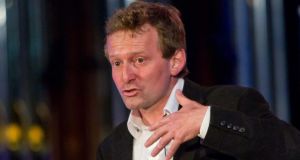 Once shunned by the political establishment, UCD economist Prof Morgan Kelly was today accepted into the bosom of academia.

The manwho called the property crash was admited to the Royal Irish Academy along with 14 other candidates, boosting the membership of the 229-year-old institution to 482.

Other new members included Geraldine Byrne Nason, a pivotal figure in the Department of the Taoiseach during the fiscal treaty referendum campaign; TCD Prof Rose Anne Kenny, a leading expert in ageing research; and political scientist Dr Iseult Honohan, whose husband Central Bank governor Patrick Honohan is an existing member of the academy.

At the ceremony admitting the new members, RIA president Prof Mary E Daly stressed the importance of “fundamental research” that was independent of commerce.

“There is a major onus on Irish researchers to ensure that Europe remains a world leader in the twenty-first century,” Prof Daly said. “But the emphasis on research that yields a return-in the form of patents, company formation or new drugs-tends to deny researchers the necessary breathing-space, the time to reflect, to allow for the wrong turns, the brilliant idea that collapses, or the unexpected lines of inquiry that might ultimately deliver something different from the original proposal, but something that is much more exciting.”

She added: “Members of the Academy should not shirk from their responsibility to let people know that basic research is important and that government support for fundamental research is a hallmark of a civilised society.”

Candidates for RIA membership must be proposed and recommended by five members, having already shown a significant contribution to scholarly research.