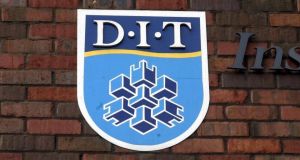 It is the first time DIT has made the top 100 list, which features two other Irish institutions: Dublin City University, which has slipped from joint 84th place last year to joint 92nd, and NUI Maynooth, which has risen from 74th to joint 67th. Photograph: Dara MacDonaill/The Irish Times

Dublin Insititute of Technology has been named as one of the world’s top 100 higher education institutions under the age of 50.

The college, which is in the process of seeking university designation under a merger plan with two other IoTs in the city, was listed 94th on the Times Higher Education “100 under 50” ranking which describes itself as a “bespoke evaluation” of the world’s up-and-coming centres of learning.

It is the first time DIT has made the list, which features two other Irish institutions: Dublin City University which has slipped from joint 84th place last year to joint 92nd, and NUI Maynooth which has risen from 74th to joint 67th.

They were separated on the list by École Polytechnique Fédérale de Lausanne in Switzerland.

DIT president Prof Brian Norton welcomed the fact that an institution such as his with a “very diverse set of learners” across different levels was featuring in global rankings. “It’s easier to get a high ranking by just focusing on a very selective intake policy, or on graduate research, but we would not be a research-led institution; we would be research-informed. It’s important we don’t get deflected from that.

“The danger is you do obsess about these things [RANKINGS]and what you need in Ireland is a diversity of educational institutions.”

Phil Baty, rankings editor of Times Higher Education, said DIT’s research output and citation impact were key factors in its performance, along with its reputation for teaching.

He said the inclusion of three institutes in the table was “a bright note for Ireland” after “the relatively negative story” of slippage by the country’s main universities in the overall rankings. “There is concern about the old prestige universities not holding their own against the world’s better universities. But this suggests a mixed economy and a number of young institutions in Ireland that can play on the global stage.”

NUI Maynooth president Professor Philip Nolan also gave a cautious welcome to its listing. “While rankings are subjective in nature and built largely on opinion, this achievement is recognition of the scholarly reputations of our staff, the quality of our research, and our collective efforts to provide an outstanding education for our students,” he said.

NUI Maynooth was established by as an autonomous university in 1997, arising from St. Patrick’s College, Maynooth which had been established in 1795.

DCU, which made the list for the third year running, was the only Irish institution in the QS World Top 50 Under 50 university rankings published earlier this year. Its president Prof Brian MacCraith said its performance in both league tables “ is testimony to the quality and commitment of our staff and students”.

Prof Norton said the designation would be useful as “it helps bring clarity to what we are about”. While no decision has been made on a name for the planned institution, he said retaining DIT could be problematic given the risk of confusion with remaining IoTs in the country. He added “in deference” to the other colleges a new name might be more appropriate.

“We certainly have not decided on a name. It’s important but it’s more important to get the institution right.”