New initiative will see junior infants taught subjects only through French, German or other languages 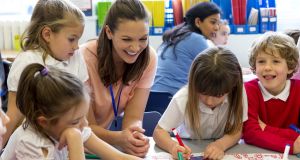 Irish-speaking primary schools are to start teaching foreign languages such as French or German from junior infants onwards under a new initiative.

An Foras Pátrúnachta, the patron body for more than 70 Gaelscoileanna, is to launch a pilot project where children will be taught a subject – such as maths, for example – exclusively through an additional language.

“Research shows that children who attend bilingual schools have the capacity to learn a third or fourth language more easily,” he said.

“In the context of Brexit, we’re acutely aware of the rising need for a multilingual workforce. We think Gaelscoileanna are really well-placed to build on our immersion model and to introduce another language.”

He said the exact language to be introduced to classes or schools will depend on the expertise of the individual teacher.

Mr Ó hEaghra said teachers in Gaelscoileanna were more likely to have qualifications in other languages.

“We have many schools where teachers have a third-level qualification in a foreign language. It’s the nature of our schools. This will allow us to tap into the linguistics skills teachers already have.”

He said training will be made available to teachers and details of the number of participating schools in a pilot stage will be announced shortly. The method of teaching part of the curriculum through a third language is known in education circles as “content and language integrated learning”.

Research over the past two decades indicates this method is linked to impressive results.

Experts are due to discuss these research methods at An Foras Pátrúnachta’s national conference in Mullingar on Saturday. They include the co-founder of the European Language Council, Prof Piet Van de Craen, one of Europe’s main specialists of this approach.

Mr Ó hEaghra said: “The most effective way to do this is from junior infants right the way through to sixth class. So, everything in our schools would be taught completely as Gaeilge, with the exception of one subject.

“That would be taught through a third language such as German, French, Spanish or Italian. The research shows this is the most successful way of learning a language.”

Meanwhile, Minister for Education Richard Bruton is set to launch a new foreign languages strategy shortly which will see Chinese and other foreign languages added to the Leaving Cert. It is aimed at preparing the State for the economic threat posed by Brexit and the rise of non-Western countries.

The new 10-year strategy is understood to include ambitious targets to increase the number of students studying foreign languages.

Polish, Lithuanian and Portuguese will also be introduced as “heritage languages” on the Leaving Cert curriculum, aimed at immigrant communities.

The introduction of Mandarin Chinese as a new subject on the curriculum is part of a bid to ensure the system is educating students in languages that are also target markets for exports.

The new blueprint acknowledges Ireland has not prioritised the learning of foreign languages, tending to regard English as a common international language.