CAO round two offers hope in Arts and Science 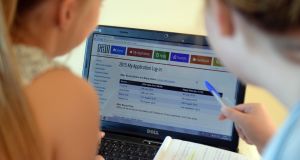 The CAO has offered the last batch of places for the 2016-17 academic year. There was good news for applicants who had just missed out by 5 or 10 points on their preferred course in the first round.

The CAO made 2,573 offers to applicants in the second round. The number of offers made for Level 8 places (1,470) constitutes just 4 per cent of the overall Level 8 offers made to date. The biggest course in the country, Arts (DN500) in UCD, fell 10 points to 310, its lowest level in years. Liberal Arts (MI004) also dropped by 10 points in Mary Immaculate in Limerick to 320.

There was good news for applicants hoping to study paramedical courses. In Cork, Dentistry (CK702) and Pharmacy (CK703) both fell 5 points to 480* and 460* respectively.

For those interested in pursuing primary school teaching, Mary Immaculate College (MI005) is down 5 to 460*. Second-level Home Economics teaching courses at St Angela’s College in Sligo also fell – with Irish it fell 15 and Home Economics with Biology and Religion it saw a 5 point drop.

Those CAO applicants who will not receive additional offers this morning are those who sought places in the courses that are in high demand in areas such as engineering, technology, nursing, construction, architecture and computer science.

From the time the students made their final choices in July, it was clear that indications of an economic recovery and the possibility of solid employment opportunities following graduation drove up demand in these areas.

Not only that, but the balance between those who secure places at Level 8 higher degree has increased from 55 per cent to 79 per cent in 2016. More and more of our young people choose college after completing second-level education, and more than three-quarters opt for a higher degree.

The proportion of the national education budget provided by the State to third-level education has shrunk dramatically over the past 16 years, however, as the various governments have shifted the burden from the tax-payer to parents in the form of a €3,000 registration charge, and the sum invested overall has remained relatively static.

This year, 128 students are supported by the same level of staffing and overall resources that educated 100 students in the year 2000.

This has had an inevitable impact on quality and access to one-to-one meetings and tutorials for example. * Not all students on this point score were offered places