CAO points breakdown: Some of highest rises cause surprise 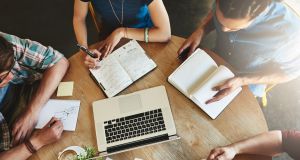 This year, some of the largest points increases are for courses that are already in relatively high demand. Photograph: Getty

It’s the news that CAO applicants have been bracing for – despite a 12 per cent increase in the overall number of third-level places available this year, CAO points have risen significantly.

But the points have not risen for all courses or, in some instances, not by as much as might have been expected. In other cases, however, the highest points rises have taken some observers by surprise.

Some of the highest points rises have been at Trinity College, where about 80 per cent of courses saw points rise, with an average rise of 27 points.

Here, we take a look at some of the most popular and familiar courses.

This year, some of the largest points increases are for courses that are already in relatively high demand.

Dental science courses at both UCC and Trinity are up from 590 last year to 613 points this year.

Points for all three pharmacy courses are up, with the highest rise at Trinity College (from 555 last year to 590 this year).

Points for commerce at UCD – one of the most popular courses in the country – are up from 498 to 521, despite the university adding an extra 14 places to the course. Indeed, points for most commerce courses are up.

Trinity’s business, economic and social studies course is up from 518 to 543 points.

Despite the unprecedented woes experienced by the aviation industry, even DCU’s aviation management and aviation management with pilot studies courses have seen points rise, from 463 to 476. This may reflect a feeling that the industry’s current travails may be worked out by the time the first years of 2020 graduate.

Only GMIT bucks the upward trend, with points for its common entry course down from 346 to 340.

Specialised science courses have also seen points rises, with UCC’s biological and chemical sciences, chemical science, and physics and astrophysics courses showing significant rises (from 498 to 510 points, 457 to 485 points and 511 to 554 points, respectively), and there are similar rises for DCU and Trinity College’s specialised science courses.

CIT and UCC’s jointly-offered biomedical science course is up from 546 to 565 points.

Points for law courses are generally up, with rises in UCC’s Law Pathways degree (from 453 to 507 points) and, in particular, for its law with French or Irish degrees. TU Dublin’s law degree rises from 422 to 451, NUI Galway’s from 473 to 499 points and Maynooth University’s law (options) course rising from 410 to 451 points. Trinity’s law degree is up from 532 to 566 while its law with language courses also sees rises (for example, law and French is up from 532 to 565 points).

Business and law courses have seen points rise, with UCD’s course up from 521 to 545 points.

Points for primary teaching courses have risen, although applicants will be relieved to see the increase is lower than they might have expected. Points at Marino are up from 452 to 484, at DCU from 462 to 488, at Mary Immaculate from 473 to 495 points and, at Maynooth University’s Froebel course, from 496 to 507 points.

For the past decade, the points for arts courses have been on a downward trajectory.

This year, with rises for most other subjects, that pattern is somewhat broken. DCU’s arts degree jumps a significant 29 points to 376, while UL and Mary Immaculate College’s joint course rises from 329 to 348 points and points for arts at Maynooth University move from 316 to 318.

UCD’s three-year joint honours programme is down from 336 points to a new low of 310, while the four-year humanities degree, which includes a year abroad, a research project or an internship, is down from 348 to 340 points.

But, surprisingly, the single largest points increase at Trinity is for the university’s drama and theatre studies course, which is up from 495 to 564, a rise of 69 points. A college spokesperson cheekily suggested that this might be due to the influence of the TV hit Normal People, which was largely set on the Trinity campus, although they acknowledged that points have risen across the board.