Increases expected in growth sectors such as science, technology and business 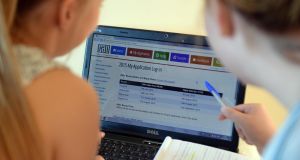 The overall number of applicants is set to climb above 80,000 for the first time since the CAO system was established almost 40 years ago. Photograph: Cyril Byrne

The number of Central Applications Office applicants is on course to reach the highest level on record this year, with significant points increases likely for popular third-level courses.

Based on these trends, the overall number of applicants is set to climb above 80,000 for the first time since the CAO system was established almost 40 years ago.

Experts say points increases are likely for a range of high- demand courses, particularly in growth sectors such as science, technology and business.

The numbers progressing to third level have increased by more than 30,000 in recent years, driven by a combination of population growth, the economic downturn and higher numbers of mature applicants.

Groups such as the Irish Federation of University Teachers and the Teachers Union of Ireland say years of underfunding, along with soaring student numbers, are contributing to an “escalating crisis” in third level.

The high demand for CAO courses comes as the Government prepares to launch a 10- year national skills strategy later this week.

The Irish Times understands that the report, due to be signed off at Cabinet today, will place a major emphasis on alternative routes to the workplace such as apprenticeships. Well-placed sources say the blueprint will propose some 50,000 apprenticeship and trainee places to be created over the next five years to help fill skills shortages across the economy.

The report will identify major skills shortages in areas such as IT, logistics, advanced manufacturing, the hospitality industry and engineering.

In addition, it will propose the development of a new national skills council to help identify skills shortages in the economy and help draw up a rapid response to manage these gaps.


* This article was amended to correct a factual error.