Call for gardaí to investigate structural defects in school buildings 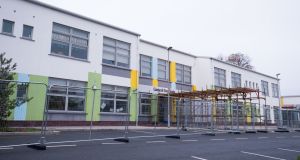 Protective fencing erected outside Gaelscoil Eiscir Riada, Glebe, Lucan, Co Dublin. It is one of dozens of schools at the centre of structural concerns. Photograph: Tom Honan

Gardaí should be called in to conduct a criminal investigation to find out who is responsible for structural defects in schools built over the past decade or more, the Dáil has heard.

Solidarity - People Before Profit TD Ruth Coppinger said an inquiry which was announced on Tuesday by Minister for Education Joe McHugh into building standards needs to go much further.

“You announced that you’ll have an investigation. Will you have a criminal investigation? Are you going to contact the gardaí about this? Surely it’s a crime to build without any regard for basic safety,” she said.

“Could we have had a Grenfell situation with children in this State? And, if so, it should be the guards brought in and not just an inquiry that will look at maybe some specifics.”

Ms Coppinger also claimed that the Department of Education and successive governments had opted to award contracts to “bottom feeder” companies who were building at the cheapest rates.

She said Western Building Systems (WBS) - the firm responsible for constructing schools which are at the centre of structural concerns - was one of a number of companies based outside the State which were undercutting local firms by up to 30 per cent.

“You have to assume that the reason they are able to do that is they are they are driving workers down from the North, probably many of them claiming welfare in Northern Ireland. That’s the belief of building workers here.... that has been a policy of previous ministers.”

Mr McHugh said an independent review of building standards for schools will seek to ensure there is full accountability for what happened and to ensure it never occurs again.

“It is important to restore trust in our school building programme. Schools are at the very heart of our local communities,” he said.

“As part of it our intentions to initiate a a programme level review of the department’s design and build programme, to include aspects such as procurement, quality control, workmanship and oversight of WBS-constructed schools.”

The Minister said his department is also examining all available legal avenues to ensure the cost of any repairs will be recouped for the taxpayer.

On the issue of a criminal investigation, Mr McHugh said: “My job is to ensure that my legal team and the department continue to work directly with Attorney General’s office and the Chief State Solicitor’s office to ensure we have a proper pursuit, a deliberate pursuit , of inquiry as to who is culpable. So whoever is culpable, we will see.”

While he said it was too early to determine the cost of repairs to schools, Labour TD Joan Burton said she expected the full cost could range anywhere between €50 and €120 million.

She also called for an inquiry to be fully independent and to include a senior counsel and individuals with professional experiences of structural issues.

Mr McHugh said the inquiry will be headed by someone outside the department and suggested that an international expert may be appropriate.

He said it will be conducted in “as timely a manner as possible,” adding that a six or nine-month investigation was too long.

Independent TD Mick Wallace, a property developer, said it was clear that there were fundamental problems with the fast-tracked design and build scheme, which saw schools built within a short period of time.

“Design and build creates huge problems ... It is so blatantly obvious that there are so many problems around how you are doing things,” he said.

“I can’t for the life of me understand why no one gives a bollocks. Why doesn’t someone want to change it or address inherent problem that have been there for years. It can be fixed. We can do things different.”