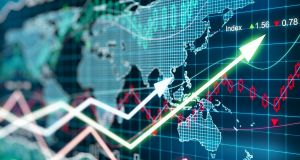 “Making decisions based on macroeconomic trends is a bit absurd. It’s better to have a long-term plan and make sure that the job is the right fit for you”

Graduates can breathe a sigh of relief: employers are hiring. Last year careers experts said the jobs market was the strongest it had been for a decade. This year they say it’s even stronger.

Yvonne McLoughlin is head of the careers service at Dublin City University.

“We are seeing more contact from employers about graduate recruitment than in previous years across a diversity of firms. There is a confidence in the economy at the moment and many new firms are setting up here.”

What do they want?

“They’re interested in the skills and attributes of graduates, including work experience and how you have spent your time at university. In our survey of graduates we are seeing many work for large multinationals as well as small and medium enterprises, but many are also setting up their own companies or working for themselves.”

Mark Mitchell, director of gradireland, says that there are excellent opportunities for graduates, and that a postgraduate is not always necessary.

“Postgrad degrees may be important for certain jobs, including some in science and engineering, or if someone has a general degree and wants to move into a more specialised area. But at the gradireland careers fair the jobs are all open to recent graduates.”

Indeed, the fair boasts firms from a wide range of sectors, among them fast-moving consumer goods, science, financial and banking firms, and they’ll be hiring graduates for graduate training and development programmes.

Ronan Kennedy is an independent career coach and trainer based in Dublin city centre. He is seeing vacancies in IT, hospitality, and fast-moving consumer goods firms (who sell the items we see on supermarket shelves) where roles could include brand management, sales and marketing.

But he cautions that graduates should not just run straight into the nearest vacant job.

“Making decisions based on macroeconomic trends is a bit absurd. People are not macroeconomic units. It’s better to have a long-term plan and make sure that the job is the right fit for you: it’s a good outcome if you don’t get an unsuitable job.”

“Don’t just base your decision on your degree. It’s important to consider your personal strengths when looking for a job. Just because you have a science degree doesn’t mean that you’ll want to be in the lab doing tests. Think of what you enjoy and why.

Was it working in a team? If so, maybe you should be in a job where you’re around people. If, on the other hand, you enjoy working on solo projects, writing and researching could be good fit. Beware though: some people might love writing but really dislike working by themselves.”

There are some firms that have always hired graduates regardless of the economic environment but in bad times they may have taken on fewer, says Mitchell.

“Now the public sector is coming back, as is the banking sector. There’s a big interest in start-up, and graduates want to work for them. Today’s graduates know they might live beyond 100 and they’re in less of a rush to have a job for life. They expect to move jobs and they also want a work-life balance.”

Four in five of the employers at the careers fair are offering internships and over 90 per cent of these are paid. Mitchell is urging students and graduates not to discount them, saying that many firms will ultimately hire good interns.

McLoughlin advises graduates not to silo themselves: a psychology student may progress to become a clinical psychologist but they might equally apply their skills in marketing; an IT or sales graduate might find a position in an electricity firm. “Companies need people from different backgrounds,” she says.

However, as they progress through their career, today’s graduates need to be adaptable, says careers expert Kennedy.

“It’s not the strongest who survive; it’s those who are most adaptable to change. The growth of Ireland’s tech industry shows we can do this, but those who don’t adapt won’t thrive. Throughout your career it’s a good idea to have an annual learning goal. Many focus on learning a new skill to make up for a weakness, but it makes more sense to become better at your strengths and become an expert in that area. That said, there is no harm in knowing a little about several areas.”

Mitchell says that graduates coming into the workplace are generally confident and highly talented. “They hear the noise about what areas are important and where the jobs are, but if they want a career in media, music or marketing, they will pursue it. They don’t drop it all to become a scientist. They know that at the age of 20 or 21 they don’t need to decide what to do with the rest of their life. But they do need to talk and think about careers, and explore the options out there. There are jobs for all disciplines, and once they are engaged with this, they have a better chance of making the right decision and starting on the right path.” Where are the jobs?

“There are still plenty of jobs for graduates – just this month Mallinckrodt, GE Healthcare and Mathworks have announced over 600 jobs, some of which would suit graduates. Companies – not just the big known names – are ramping up their graduate recruitment programmes. Accountancy firm HLB Sheehan recently announced their plans to recruit for 10 new positions including trainees.

“In IT the larger employers are recruiting in volume across software engineering, data analytics and development operations. Graduates do need a first class honours or a 2:1 in computer science or a computer-related discipline. Whilst it is a job rich and candidate poor jobs market in IT, there is still competition at the graduate level. Any graduate who has experience in GIT Hub projects, has contributed to tech communities in any way or has been involved in CoderDojo has an edge over other applicants. Employers like to see that would-be employees have a genuine interest in tech outside of the job as it usually means that they will keep up with the latest technology.

“There are plenty of job opportunities for graduates in banking, financial services and funds. These jobs range across back office, operations and customer service. Employers ideally look for people with degrees in business/commerce, economics or finance. DCU, UCD, UCC and UL are the main source of graduate recruitment. In insurance the main jobs for graduates are in advisory, junior claims and customer service. Graduate salaries are anything between €26,000 and €35,000. They have definitely gone up in the last two years and expectations from employers have gone up as well. Usually successful graduates applying for these positions are those who have relevant experience in internships. Employers now are tending to stay in touch with the graduates that spent an internship with them or who got work experience with them during college as they know the systems and procedures already.

“Accountancy firms are also taking on graduates in volume again – the top six tend to recruit straight from universities. All the firms will be looking at exam results – usually from third year – as the milk rounds take place in October and March of their final year. The milk round fairs are seen as vital sources for hiring by employers. Students from other disciplines other than accountancy are also being hired by accountancy firms but they need to have excellent grades in their discipline and they will take approximately three months longer to do accountancy exams as they will not have as many exemptions as someone with an accountancy/finance degree.”

In addition to construction, IT, technology and digital continues to be a huge destination for graduates, both with multinational companies but also indigenous start-up technology companies. Life sciences is also a growth sector, but even the public and NGO sectors are beginning to see an increase in the number of roles available for graduates.

“Construction is certainly the rebound story. Whilst IT roles have consistently offered job opportunities to graduates almost throughout the financial crisis, the construction sector was hit enormously, leading to thousands upon thousands of construction professionals and skilled labourers leaving Ireland for job opportunities abroad. Some of these individuals are now returning to take up management and senior level positions in the construction sector, but there is a significant opportunity for entry-level and graduate level candidates in this market. Given the upturn in the economy, areas such as HR and marketing are also seeing a renaissance, given that some of these back-office functions may have been pared back during the recession.

“Most sectors are seeing growth and good levels of opportunities, but there are pockets where activity is still not at the level that all job seekers would like. Senior positions in areas such as accountancy are in short supply. Rural areas are also not seeing the same level of growth and job creation as the main urban centres, although the SME sector is starting to turn. However, from a graduate’s point of view, the picture looks very healthy, with continued foreign direct investment activity and an increasingly buoyant domestic market offering opportunities in most sectors.”