Chinese to be added to Leaving Cert curriculum 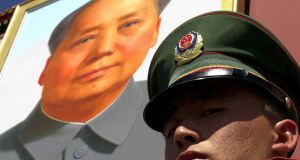 A 10-year strategy to be published shortly by Minister for Education Richard Bruton includes ambitious targets to increase the number of students studying a foreign language. Photograph: Eugene Hoshiko/AP Photo

Chinese and other foreign languages are to be added to the Leaving Cert curriculum to help students to prepare for the economic threat posed by Brexit and the rise of non-Western countries. A new 10-year strategy is to be published shortly by Minister for Education Richard Bruton, which includes ambitious targets to increase the number of students studying foreign languages.

Polish, Lithuanian and Portuguese will also be introduced as “heritage languages” on the Leaving Cert curriculum, aimed at immigrant communities.

The introduction of Mandarin Chinese as a new subject on the curriculum is part of a bid to ensure the system is educating students in languages that are also target markets for exports.

The new blueprint acknowledges that Ireland has not prioritised the learning of foreign languages, tending to regard English as a common international language.

However, it says these assumptions will no longer hold true against the backdrop of Brexit and the global importance of the non-Western countries such as China, India and Brazil.

In order to help reach targets to increase the numbers studying foreign languages, the possibility of schools clustering together to provide wider access to minority languages will be explored.

In addition, there may be a combination of online and face-to-face teaching by specially appointed teachers who will work across different schools in key regions.

Among the targets set out in the plan include:

– All junior cycle students will study a foreign language by 2021;

– A 10 per cent increase in the number of Leaving Certificate students taking foreign language subjects, with a drive to diversify the number of languages studied in addition to French;

– An increase of at least 50 per cent in the number of students completing Erasmus programmes, with reductions in numbers doing these through English;

– Supporting a fifth of students at higher education to study a foreign language as part of their course, especially those studying international business, and information and communications technology (ICT).

The plans are likely to be greeted with scepticism by teachers’ union who say there is a crisis in the supply of qualified teachers at second level in key subject areas such as Irish.

Mr Bruton says there will be an audit of secondary teachers in the system who are qualified to teach foreign languages but are not doing so.

If this is found to be the case, schools will be encouraged and supported with training to diversify the range of languages on offer.

In addition, the plans says teachers should be given training opportunities to enhance their language skills , while a new basic standard of proficiency should apply to students wishing to graduate as language teachers.

In a statement, Mr Bruton said students need to be supported with the skills to understand other cultures and societies in order to thrive in the modern economy. As a result, a “step-change” was needed in the learning of foreign languages in Ireland.

While additional resources will be needed, he said we had major assets to build on, such as the fact that children are learning a second language – Irish – from age four upwards.

The new plans also envisage changes at primary level, with the possibility of teaching aspects of curriculum through Irish and foreign languages to be explored.

Research shows that teaching languages as a means of communication in this way, rather than as an academic subject to be learned in isolation, can be very effective.

The State’s advisory body on the curriculum, the National Council for Curriculum and Assessment, will also be asked to consider including foreign languages in senior classes at primary level.