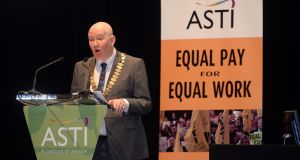 The Association of Secondary Teachers of Ireland (ASTI) has voted to suspend normal business and meet in private to discuss its industrial relation strategy following a stormy meeting of its annual convention.

The convention heard claims that the union is “haemorrhaging” younger members who are losing out on pay and access to permanent jobs because of the ASTI’s decision dispute with Government.

The union’s decision to “repudiate” the Lansdowne Road pay agreement has triggered penalties which mean new entrants face a four-year wait to secure permanent contracts instead of two years.

In addition, members are losing thousands of euro in increments and allowances due to pay freezes, as well as carrying out supervision duties for free.

Noel Buckley, a member of the union’s Tipperary branch, said many members were increasingly disillusioned with the direction of the union.

“We cannot continue to haemorrhage member. We cannot dismiss the fact that 450 or 500 members have left the union. There is something wrong with a union when members walk away,’ he said.

Other members said they had to be able to go back to their staff rooms with something to show to younger members who are being “thrown over the top” of the union.

Mr Buckley and several members put forward a motion to suspend the annual conference’s normal business to discuss a strategy for the union on these issues on Wednesday afternoon in private.

Members on voted overwhelmingly in favour of the motion.

Several speakers had opposed the motion on the basis that it was an attempt to overturn a vote by members earlier this year to reject settlement proposals aimed at resolving the union's dispute with Government.

The conference is due to spend at least two-hours discussing these issues and may result in fresh motions being put to delegates on Thursday morning.

Yesterday’s opening day also involved heated debate over the union’s strategy with some members describing the ASTI as as the “North Korea” of the trade union movement.

A large majority at the ASTI congress in Killarney voted in favour of a motion calling on the union to “vigorously oppose” any future pay agreement that does not guarantee equal pay, provide an end-date for pay restoration and terminate financial emergency legislation.

Teachers recruited after the onset of the economic crisis are on a lower pay scale than their colleagues who got jobs prior to 2011.

Several members who opposed the motion argued it would tie the union’s hand, isolate it further and worsen the pay and conditions of members.

Richard Terry, a member of the Fermoy branch in Co Cork, said ASTI members have been “left out in the cold” and are losing out on hundreds of euro a month, while other unions have secured vital gains for recent entrants to the teaching profession.

Noel Hogan, a member of the Monaghan branch, said it was time for a credible campaign, instead of a “zombie campaign” marked by members worried over redundancies and pay losses.

Arguing in favour of the motion, standing committee member Mark Walshe said the union was not isolated and argued that other teaching unions were likely to support its position.

Bernadine O’Sullivan, a former ASTI president, said the union was not depriving members of contracts or pay. She said the Government’s financial emergency legislation needed to be repealed, especially in light of the country’s “phoenix economic recovery”.

Martin McMullen of the Donegal northwest branch said the Government’s tactics and threats were frightening some teachers, but now was the time to hold firm. The use of financial emergency measures was a “cynical ploy to divide and conquer the union and should be resisted”, he said.