A guide to junior cycle reforms: what parents need to know 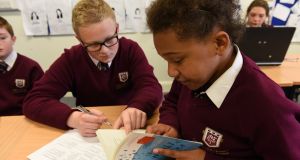 This week thousands of students will take part in the first ever assessment task linked to the new junior cycle. It may not sound like much, but it’s a big deal.

In essence, it’s a glimpse into how a new generation of students will be taught and assessed in the future. If successful, it may also provide the template for a reformed Leaving Cert over the coming years.

The changes are aimed at providing a much broader snapshot of students’ achievements and skills, rather than cramming three years of learning into a single high-stake exam at the end of third year.

It’s not before time. The old Junior Cert began as a radical departure that was intended to provide students with a richer educational experience. Instead the exam-based model quickly led to the programme becoming something of a mini-Leaving Cert, complete with rote learning, teaching to the test and high-stakes written exams. The model is outdated and well out of step with international best practice.

Under the new system, the assessment of students will happen over the three years of the junior cycle. There will still be a traditional written exam, but with less of the pressure associated with the old exam. The idea is that teachers will have ongoing discussions and feedback with young people and their parents on how they are doing in school.

Students will also be encouraged to think about their own learning, potentially boosting engagement and placing them at the heart of the curriculum.

For those in schools where there is no dispute, the new classroom-based assessments are aimed at capturing key skills such as teamwork, creativity and managing information. These are areas that, until now, have never been properly assessed in State exams. These are also the kind of skills increasingly required in the rapidly changing modern workplace, and are backed up by a large body of national and international research by educators.

What is changing for this year’s third-year students ?

This year’s third-year students are the first to experience the reformed curriculum for English.

The junior cycle changes are due to be fully rolled out for science and business studies next year; it will take several years before the changes are rolled out across all subjects.

In schools that are fully participating in the reformed curriculum – mostly community and comprehensive schools and those under the patronage of Education and Training Boards (ETBs) – students have completed two classroom-based assessments. The first, last May, tested students’ oral communication skills; the second is based on a collection of students’ writing over the past two years. These students face an assessment task this week, which requires them to reflect on what they have learned.

In schools that are not fully participating – typically voluntary secondary schools – students have been taught the new curriculum for English. They have not, however, had a chance to complete these new classroom-based assessments. Their teachers have also not been trained in delivering the new curriculum.

Is my son or daughter at risk of losing 10 per cent in his/her exam due to a union dispute?

The changes are only being fully rolled out in one out of three schools due to a dispute involving the Association of Secondary Teachers in Ireland.

The union has been opposed to teachers playing any role in assessing their own students for work linked to a State exam. As a result, members have been banned from any involvement in classroom-based assessments. This means that many children – at the time of writing – are unable to take part in this week’s assessment task. It means they will be marked out of 90 per cent, and will automatically lose 10 per cent.

It remains to be seen whether new proposals being considered by the union will be accepted that could allow these students to do their assessment task over the coming months.

What courses can students study under the new curriculum?

Most students will study between eight and 10 subjects as part of their junior cycle programme. English, Irish and maths are mandatory.

But schools have the flexibility to decide what combination of subjects or new short courses are provided.

Two short courses are the equivalent of a single traditional subject. They are designed to be directly related to students’ interests. They range from civic, social and political education (CSPE) to coding.

How will students’ skills outside the written exam be assessed?

Teachers will assess students’ performance in classroom-based assessments for a new “junior cycle profile of achievement”.

This is separate to the traditional written exam at the end of third year, and is aimed at capturing students’ performance across a broad range of skills. These will not be marked using traditional grades. Instead, teachers will award students descriptors: “exceptional”, “above expectations”, “in line with expectations” or “yet to meet expectations”.

How will the written exam change?

Gone is the predictability of the old exams; in its place are questions that require students to analyse and think critically rather than regurgitating something they might have learned off by heart.

What kind of training has been made available for teachers?

It’s been a mammoth task. Thousands of teachers have already been trained for the new approach. In the case of English teachers, many have attended at least three separate training sessions preparing them for assessments and marking.

By all accounts it has been widely successful, with many teachers embracing the opportunity for professional dialogue on issues with colleagues. In response to the scale of the training challenge, a new approach to training of others teachers is being trialled.

In Co Louth last week, seven schools closed and all teachers were trained in a single day. The same approach will be trialled in towns across the country over the coming months.

20%-40% Students who score in this band will be deemed to have “partially achieved” their grade.

240 Number of hours a subject is designed to be taught in at junior cycle.

10 The number of subjects a student may study at junior cycle, including “short courses”.