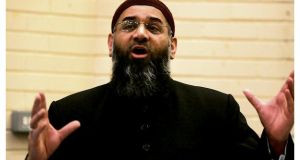 Anjem Choudary speaks against the UCD Law Society motion That This House Believes Women's Rights Should Trump Religious Doctrines at a lively debate on the campus in Belfield, Dublin, last night.

THE LEADER of a banned UK group has told a debate that talking about the rights of women in a Western society like Ireland where Muslims are a minority “inevitably smacks of trying to force the minority to accept the majority belief as the norm”.

He said that in a society where 95 per cent of people were secular, Islam faced an uphill battle.

He said Muslim women were not suppressed or subjugated by Islam. “There is nothing like Islam to emancipate women from slavery and servitude to men, from the cosmetics industry, fashion and pornography and all the other ways in which man tries to dehumanise women.”

Proposing the motion, Maryam Namazie, an Iranian-born rights activist and spokesperson for the One Law for All campaign against Sharia law in Britain and for the Council of Ex-Muslims in Britain, said religion should not be allowed to disrupt women’s rights.

“The two things are antithetical to each other, they are not compatible with one another.”

She said women’s rights and freedoms were being denied under Sharia law, citing a woman’s inability to sign her own marriage contract and that women can be stoned for being unfaithful as evidence of this.

Azar Majedi, chairperson of the Organisation for Women’s Liberation and a leader of the Worker Communist Party of Iran, said all religions were “patriarchal, misogynist and anti-women”.

1:01 Rescuers rush to save 270 stranded pilot whales in Australia