Date for water charges to be revealed ‘in weeks’

Hogan says talks with troika must finish before date is announced 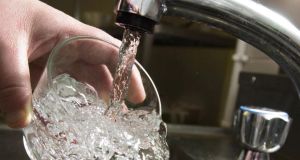 The Government must conclude talks with the troika before announcing a date for the introduction of water charges, Minister for the Environment Phil Hogan has said.

This process will take a number of weeks, Mr Hogan said in Cork as he announced 400 jobs to help support the roll out of water services.

Mr Hogan said the Government had made it clear in discussions with the troika that it wanted to see the introduction of water charges pushed back from its proposed start up date of January 1st 2014 and he was confident of some success in that regard.

“As of now in the memorandum of understanding between Ireland and the Troika, January 1st, 2014 is the date but we are expecting to make progress in relation to putting back that date for a period of time but the exact precise date will be known within a couple of weeks.”

Mr Hogan was speaking in Cork where Irish Water confirmed that Abtran Ltd would operate its contact call centre to support the roll out of water metering and in the process would create 400 jobs to provide customer care to some 1.6 million private and commercial customers.

Mr Hogan confirmed that 100 of these new posts will be created by the end of July at Abtran’s operation in Cork with the remaining 300 positions coming on stream by the end of 2016 when Irish Water hopes to have just over 1 million water meters installed.

Mr Hogan and Irish Water Managing Director, Dr John Tierney declined to be drawn on how much householders would pay. Dr Tierney also declined to comment on the scale of investment required as the company will shortly be seeking tenders for the work.

“It’s a significant investment but we’re in a very sensitive stage of the tender process at the moment but by July 11th when contracts are decided upon, we will be in a position to talk about the cost at that stage,” said Dr Tierney.

“Even internationally the rate of what we are proposing here is significantly larger than anything has been done in Britain, for example and obviously the more you do, the more economies of scale you get .. it’s a huge contract so I expect we will get international bids.”

Dr Tierney explained the country will be divided into eight regions and Irish Water expects that the roll out of meters will take place simultaneously across all eight regions and in the process create a further 1,600 jobs..

Over 4,000 people are currently employed in water service provision in local authorities and he expected many of these to continue to be involved in water provision through service level agreements with Irish Water though others will come to work for Irish Water, he said.

4 Vaccine rollout to be ‘reset, not revamped’ after AstraZeneca decision – Reid