Criticism of focus of ad campaign against domestic violence 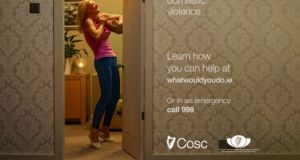 The What Would You Do? advertising campaign includes billboards, prime time television adverts and a website which gives information on how people can safely intervene when they witness domestic violence

A prominent campaign which focuses on the role of bystanders in preventing domestic violence has been criticised by the National Women’s Council of Ireland as unsupported by evidence.

The What Would You Do? advertising campaign, which was launched last month by Cosc – the national office for the prevention of domestic, sexual and gender-based violence – asks those who witness domestic violence if they would intervene to help.

It includes billboards, prime time television adverts and a website which gives information on how people can safely intervene when they witness domestic violence. Cosc paid advertising agency CawleyNEA/TBWA and communications firm PHD almost €1 million to develop and implement the campaign.

However, the director of the National Women’s Council of Ireland has said there is no evidence stating what kind of help a bystander should offer in domestic violence situations.

“There isn’t clear evidence,” Orla O’Connor told The Irish Times. “The focus of the campaign is on the bystander. We don’t have evidence in terms of the impact that might have, who the bystanders are likely to be, or what they would need to say in order to reduce domestic violence or in order to encourage women to report more. So there is a lack of evidence showing this is the best way to go.”

“Because that’s not clear we have to ask questions, There’s a large amount of money going into this; it has to have a clear purpose and vision. So that would be part of what we are questioning in the women’s council.

“Awareness campaigns are good, but they need to be very clear in terms of their purpose and at the moment that is unclear.”

Ruth Coppinger, an Anti-Austerity Alliance TD for Dublin West, said she was unhappy that the campaign does not focus on the perpetrators of violence.

“I think the focus of it is completely wrong. It’s aimed at what would you do as a neighbour or relative. It’s not aimed at the people who perpetrate violence.

“It’s primarily males who commit violence against women. There aren’t campaigns aimed at young men or males in school pointing out that violence isn’t acceptable. Most violence begins when people are under 26, and there isn’t any campaign in schools.”

Ms Coppinger said initiatives which raised awareness of the warning signs of domestic violence were important, but the What Would You Do? campaign was “like throwing our hands up in the air and saying there is nothing that can be done about the culture”.

Ms Coppinger pointed to figures released this year by Tusla, a child and family agency, which suggested 15 women a day were been turned away from refuge centres due to a shortage of resources.

“What’s the point of asking what would you do when the State isn’t even able to deal with the numbers of those who experience violence.”

A spokesman for the Department of Justice defended the campaign as just one pillar of a broader national strategy.

“The aims of the campaign are to increase the awareness of domestic and sexual violence, and to bring about a change in long-established societal behaviours and attitudes.”

The department said the campaign drew on previous Irish campaigns on road safety and quitting smoking, and that similar campaigns around the world have been found to reduce domestic violence rates.