Young man left with head, neck and back injuries after Christmas party attack in Buncrana 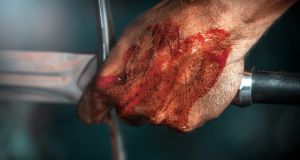 A young man has been left with a severe facial injury after being attacked with what is believed to have been a sword during a Christmas party in Co Donegal last week. Stock photograph: Getty Images

A young man has been left with a severe facial injury after being attacked with what is believed to have been a sword during a Christmas party in Co Donegal.

The brutal attack happened in Buncrana during the early hours of December 27th last.

The man, who is in his early 20s, also suffered head, neck and back injures after being set upon in the Earlsfort area of Cockhill just after 2am.

The man was rushed to Letterkenny University Hospital where he underwent emergency surgery.

A picture of the man’s injuries, taken shortly after the attack, shows how the entire left side of his face was opened up.

Garda Inspector David Murphy confirmed they are liaising with the victim as part of their investigation into the circumstances surround the attack.

“I can confirm that a weapon was used and we are treating this matter very seriously.

“The injured party was taken to Letterkenny Hospital for treatment following the assault but we understand he was released.”

The Buncrana based officer appealed to anybody who was in the Earlsfort Avenue area at the time of the attack to come forward in confidence.

He said he could not say any more about their investigation into the possible motives or reasons behind the attack.

It is not understood that any arrests have yet been made in relation to the attack.

Anybody with any information is asked to contact Buncrana Garda station on 07493 20540.