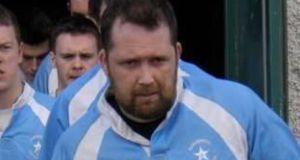 Shane Geoghegan: murdered in a case of mistaken identity in Limerick in November, 2008

The chief prosecution witness in a Limerick murder trial has said she should not feel guilty about Shane Geoghegan’s murder, despite knowing about the killing and doing nothing to prevent it.

April Collins (26) spent her third day in the witness box at the Special Criminal Court today in the trial of 30-year-old Limerick man John Dundon, who is charged with murdering the Garryowen rugby player.

The trial has heard that the 28-year-old was gunned down in a case of mistaken identity as he returned home to his girlfriend at about 1am on November 9th, 2008. He died at the scene of gunshot wounds to his head and body.

Ms Collins, who is the ex-partner of Dundon’s brother, Gerard Dundon, has told the three-judge, non-jury court that the actual target of the killing was a man named John McNamara. The mother-of-four testified that she had heard John Dundon order his killing and that he panicked when he heard the wrong man had been shot.

Dundon, of Hyde Road in the city has pleaded not guilty to murdering Mr Geoghegan at Clonmore, Kilteragh, Dooradoyle, Limerick.

Ms Collins has agreed with Brendan Nix SC, defending, that she could have saved Mr Geoghegan’s life if she had taken two opportunities to report the planned murder in the hours before he died. She had been stopped by gardai twice that night.

“You’d rather see Mr Geoghegan shot down like a dog rather than upset yourself,” he suggested.

“I couldn’t say anything at the time,” she replied.

“If you had any conscience, you’d say sorry in court,” he said.

“I shouldn’t be the one feeling guilty. It should be the man here in court,” she responded.

Mr Nix suggested that she should be feeling guilty if things happened the way she said they had.

“I was in the house when John Dundon ordered the hit,” she had testified earlier.

“He did. I’m telling the truth,” she insisted, adding that she couldn’t even show her fear at the time or she would be killed.

“No-one knows what it was like to be living with these people,” she said at one stage.

“You were the one person out and about who could have told the guards and saved Mr Geoghegan’s life,” said Mr Nix.

“I couldn’t. I would have been killed,” she insisted.

He asked her if she had immunity from prosecution in relation to the case.

“I didn’t do anything wrong,” she responded, to which Mr Nix said he would tell her what she did.

“You knew of a killing about to go down,” he said. “You didn’t tell the guards about it when given two opportunities.”

He noted that she then waited years before giving information to the authorities on April 20th, 2011.

“But if you’re around people you’re terrified of, when you’re in such fear of your life of them, you’re not going to turn your back on them,” she replied.

Mr Nix informed her that she could have told the gardai in secret, but she said she thought she would have to sign a statement. He then asked if his client had ever thumped or beaten her and she said that he had.

“My client’s a champion boxer and I suggest that if he beat you, you’d be pulped by him,” he said.

She agreed that she had broken up with John Dundon’s brother, Gerard Dundon, about a month before she gave her statement on Mr Geoghegan’s murder.

She agreed that it was over the phone on his birthday and while he was in prison in Portlaoise. She agreed that she could have said: ‘I’m not going to spend the rest of my f***ing life going up and down to jail to visit you’ and that she stopped accepting his calls after that.

“I didn’t want that kind of life anymore and especially for my kids,” she said.

She agreed that it was around this time that she began a relationship with Thomas O’Neill, one of the Cratloe rapists.