Man named locally as Alan McSherry (48) found dead on country road by his wife at 5.10am 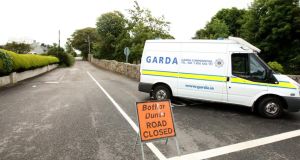 
The body of the man found dead following a hit and run incident in Co Donegal early yesterday was discovered by his wife who got out of bed to go and collect him when she realised he may be having difficulty getting a taxi home.

The man, named locally as Alan McSherry (48) and originally from England, was found dead on a narrow country road by his wife Jo at 5.10am. He was walking from a night out in Bundoran to his home in Boyannagh, Co Leitrim – about three kilometres – when he was struck and fatally injured.

Gardaí, who have appealed to the driver who failed to stop to make contact, said the collision could have occurred any time after 3.30am. Car parts were found at the scene.

It followed an exchange of missed telephone calls between the victim and his wife. A family friend said she awoke and saw missed calls and finally realised her husband was trying to contact her to tell her he couldn’t get a taxi home.

Found his body
She then phoned him and, failing to get an answer, drove towards Bundoran to meet him. She found his body on the roadside about a kilometre from their home.Donegal county councillor Seán McEniff, whose home is close to the scene, said: “I knew the victim and his wife very well. I am very much annoyed that the driver who knocked that fellow down drove off and left him on the roadside.”

Mr McSherry and his wife, who had no children, were from the Birkenhead area of England. They arrived in Bundoran 15 years ago in a camper van and never left. They both loved surfing. She got work with the Donegal Adventure Centre. Her husband did maintenance work around the town, mainly at the Bridge Bar where he was drinking on Saturday night until about 10pm before moving on elsewhere. Noel Madden, who owns the bar, said: “He was a very hard worker and good at his job. He would have got a lot of work around the town. He was one of nature’s gentlemen and his wife is a lovely person, too. They were friends of mine and I am so upset at what happened.”

Garda Insp Michael Harrison, who is leading the investigation, said: “At this stage we are not prepared to give any indication of the parts of the car or what type of car it was.

“My appeal is for the driver that hit this man to make contact with gardaí at Ballyshannon Garda station on 071-98 58530 or the Garda confidential telephone.”