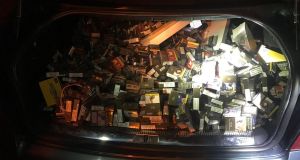 Boot full of cigarettes seized in raid by gardaí

Gardaí have arrested two suspects believed to be part of a ram-raiding organised burglary gang after a crime spree across two counties in the early hours of Tuesday.

A car the two men were travelling in was brought to a stop in west Dublin after a pursuit from the south-east into the capital which involved the Garda helicopter and gardaí in cars.

The arrests were made by gardaí working under Operation Thor.

Both men have been charged in relation to this incident are due to appear before Gorey district court  on Wednesday.

It was a dedicated operation designed to thwart burglary gangs, especially those travelling for crimes through the night before returning to their bases, which are usually in Dublin.

A series of robberies took place in counties Wexford and Wicklow within hours of each other and gardaí believe the men being questioned this afternoon were responsible for all of the break-ins.

The raids began shortly before 2am when a number of men forced their way into a petrol station in Gorey, Co Wexford.

In both villages convenience stores were burgled before the gang moved on to a mobile phone shop in Wicklow Town, taking stock from the premises.

Gardaí had been alerted and were looking for the raiders as the crime spree continued. Eventually the suspects’s car was located and after a pursuit, during which the Garda helicopter tracked the raiders’s vehicle, gardaí on the ground moved in and made two arrests.

“During a follow-up operation involving gardaí attached to Special Crime Operations, Dublin-based Garda Units and the Garda Air Support Unit, a car was intercepted in the Bawnogue area of west Dublin,” a Garda statement confirmed.

“Two men aged in their 20s were arrested at the scene following a foot chase. Both men are currently detained at Wicklow Garda Station under Section 4 of the Criminal Justice Act, 1984.

“The car involved in the incident has been removed for forensic examination.

“A large quantity of cigarettes along with phones, SIM cards and other property were recovered from the car by investigating gardaí.”

1 ‘We are worried’: Taoiseach warns plan to reopen all pubs on July 20th may be delayed
2 Man (21) charged over shots fired at gardaí in Cork
3 Cabinet extends advice to avoid non essential travel until July 20th
4 Judge dismisses €60,000 claim over boy (3) who cut his lip in fall
5 Minister for Children condemns ‘homophobic’ attacks from ‘far-right’
Real news has value SUBSCRIBE