Woman believed to be behind Traveller gun attack

Dublin shooting described as ‘the lowest of the low’

Arthur Collins, father of the 17-year-old boy and 29-year-old woman and grandfather to a six-month-old baby who sustained gunshot wounds at Parlickstown Green, Co. Dublin speaks to media, a day after the shooting. Video: Collins 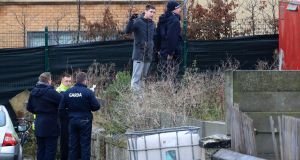 Gardaí continue their investigations at the scene of a shooting in Parlickstown Gardens, Co Dublin. Photograph: Colin Keegan/Collins Dublin

Gardaí believe a woman discharged the gun that left three people, including a baby, wounded in west Dublin on Monday.

A shotgun, which gardaí believe was used in the attack, was found during a search in Dublin on Tuesday. During another Garda operation, a woman was arrested for questioning in Brittas, Co Wicklow.

The 23-year-old female suspect was taken to Dublin and was last night still being questioned on suspicion of involvement in the shooting. She is being held at Blanchardstown Garda station under Section 30 of the Offences Against the State Act. She can be questioned for up to 72 hours without charge.

The shooting occurred at Parslickstown Gardens, Mulhuddart, in a development where a number of settled Travellers live.

A man in his 30s detained on Monday in Mulhuddart shortly after the shooting was still being questioned by gardaí on Tuesday night. He was arrested after ammunition was found in Mulhuddart.

Detectives are working on the theory that a family-based dispute has arisen because of a romantic relationship between a man and woman. They believe the shooting represents an escalation in that dispute.

Lynn Doyle (29) and her eight-month-old son, John, were wounded, along with a 17-year-old relative, Matthew “Matsie” Collins, who tried to shield the baby during the attack. All three were sprayed with shotgun pellets.

None of the three was the intended target of the shooting, it is understood. The target may have been John Collins, the father of the baby.

About 10 gardaí and crime-scene investigators were at the small housing scheme, the entrance to which was cordoned off with Garda “crime-scene” tape, on Tuesday morning.

During Monday’s incident, a car was driven into the cul-de-sac and 37 pellets fired into the garden of one of the four houses. It is understood the victims were putting up a Christmas tree at the time.

Matsie Collins, who was holding the infant, went into the garden to see what was happening and was fired at. It is understood he turned away to shelter the baby and was hit again, in his stomach and side. The baby was hit in the leg and arm. Ms Doyle, who ran out to the garden, was also shot. The baby was taken to Temple Street children’s hospital and the two other victims to Connolly Hospital, Blanchardstown.

Arthur Collins, father of Matsie and grandfather of baby John, said on Tuesday the baby had a broken leg, while Ms Doyle had surgery that morning. He said the family was extremely worried about the teenager’s future health, as he may have internal damage, including to his bowel and kidneys.

He described the shooting as the “lowest of the low”.

Describing the cul-de-sac where the incident occurred as “very derelict and run-down”, Catherine Joyce of the Blanchardstown Travellers Development Group said her organisation had been advocating with Fingal County Council on behalf of the families who live there “for years now” about having the scheme refurbished.

“They don’t even have heating working there at the moment.

“What we are now going to do is try to sit down and work with the families, to get mediation services in there and try to resolve it. The fact is though that because of the housing crisis and the very acute way it affects Travellers . . . neitherof these families has anywhere to go.”

A spokeswoman for the council said: “There are four Traveller-specific council houses at Parslickstown Gardens. All of these families have been allocated these houses by Fingal County Council. The council had engagement with some of the families in relation to estate management issues.”

Susan Shaw, interim director of the Irish Traveller Movement, said that in the past Travellers could just move away from a dispute.

“With the Traveller accommodation crisis as fraught as it is, with the constant underspend by local authorities in Traveller housing, we are seeing more overcrowding, more dreadful housing conditions and people can’t move away from situations.”

She also cited the impact of social media, “where disputes can be kept going”, saying it prolonged and exacerbated tensions.

She called for greater resources for Traveller mediation services, adding that many Travellers were reluctant to seek the assistance of gardaí as they didn’t trust An Garda Síochána.

Martin Collins, co-director of Pavee Point, pleaded for calm and for no escalation of the dispute between the families. “That has to be the priority at this point,” he said.

Arthur Collins, however, remained angry as he talked to journalists at Parlickstown Gardens. He felt safe with gardaí there. “But what good is that when they are gone? When they are gone it’s back to square one again, looking over your shoulder. A retaliation is going to happen one way or the other.”