Two die in separate road crashes in Tipperary and Offaly 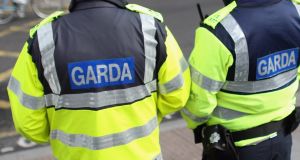 DUBLIN, IRELAND - MAY 17: Garda police officers patrol the streets of Dublin ahead of the arrival of the Queen on May 17, 2011 in Dublin, Ireland. The visit by Queen Elizabeth II and the Duke of Edinburgh to the Republic of Ireland is the first by a British monarch for 100 years. (Photo by Oli Scarff/Getty Images)

A woman and a man have died following separate road crashes in Tipperary and Offaly this weekend.

In Offaly, a 38-year-old pedestrian was seriously injured in a collision with a car on the R420 at Muinagh, on the Clara Road, just outside Tullamore.

A man in his late 40s died following a collision between his motorbike and a car in Co Tipperary on Saturday evening.

Gardaí said the incident took place on the N24 between Clonmel and Carrick on Suir about 6.15pm.

The motorcyclist was pronounced dead at the scene and his body has been removed to the mortuary at Tipperary General Hospital in Clonmel. The female driver of the car was uninjured.

Roads in both incidents are closed to facilitate examinations by the Garda Forensic Collision Investigators and diversions are in place.