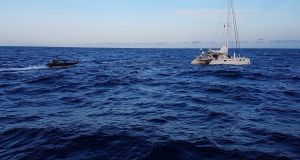 Five men have been charged after being captured at sea with the assistance of the Irish Defence Forces while allegedly in possession of at least 500kg of cocaine .

The men, who are from the UK, Estonia, Latvia and Romania, were arrested after their catamaran was boarded off the coast of Cornwall in the English Channel by members of the UK Border Force as part of an operation by the UK’s National Crime Agency (NCA).

An Irish Naval vessel and an Air Corps maritime patrol aircraft participated in the inter-agency operation. They conducted a surveillance operation as the catamaran sailed along the south coast of Ireland prior to entering UK waters.

It is believed the drugs, which weigh at least half a tonne, were destined for a southern English port. A spokeswoman for the NCA said the drugs are currently being examined to determine their value.

The five men appeared at Bristol Magistrates Court on Friday morning charged with conspiracy to import cocaine. Britons Nigel Clark (63) and Dean Waters (60), of no fixed address, catamaran skipper Richard Must (48) from Estonia and crew members Voldemars Gailis (20) from Latvia and Raymond Dijkstra (27) from the Netherlands all appeared at Bristol Magistrates’ Court accused of conspiracy to supply cocaine. They were remanded in custody to appear at Bristol Crown Court on October 4th .

A border force cutter HMC Vigilant intercepted the catamaran early on Thursday and escorted it to Newlyn harbour in Cornwall.

“This intelligence-led investigation has resulted in the seizure of a significant quantity of cocaine and the arrest and charge of five men with conspiracy to import cocaine,” said NCA Deputy Director Graham Gardner.

“Through our collaboration with partners - including Border Force deep rummage specialists, Devon and Cornwall Police, the Maritime Analysis Ops Centre, the Irish Navy and the Irish Air Corps - we have disrupted another significant importation of cocaine,” he said.

“The result was very positive and saved lives,” Capt Brian Fitzgerald from the Irish naval service told RTÉ’s Morning Ireland. “This yacht travelled from one extreme of Irish waters over 200 miles off the west coast of Ireland. Irish naval service and Air Corps tracked it through this maritime area until UK Border Force took up the baton when it entered UK waters.”