Joan Collins’ action over Government payments will be heard in October 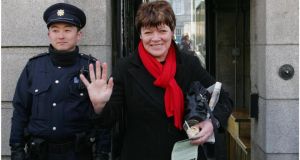 A three judge High Court will next October hear the High Court action by United Left TD Joan Collins against the Government’s promissory note payments as part of the €31 billion recapitalisation of various banks.

The President of the High Court Mr Justice Nicholas Kearns said today, given the gravity of the case and the fact the whole basis of the State’s funding is at issue, he considered three judges should hear the case.

Michael McDowell SC, for the State, said the issues of law raised were of huge importance to the State and his side did not want to be “bounced” into an early trial.

Ross Maguire SC, for Ms Collins, said a €25m promissory note payment was due on June 17th but added he accepted the issues were very important.

Mr Justice Kearns said Ms Justice Mary Laffoy had agreed to head a three-judge High Court to hear the case but the nature of the issues meant that could not happen until October. The two other members of the divisional court would be appointed later, he added.

He also noted another two High Court judges are to be appointed imminently and that would help ease the pressures on the High Court list.

Earlier, when Mr Maguire said he was anxious for an early hearing date given the imminence of the June 17th payment, Mr Justice Kearns indicated a date next Tuesday might be available. Mr McDowell said he was in the matter from the outset and was anxious to remain in it but was not available next Tuesday.

The gravity of the issues required more time for preparation as the whole basis of the State’s funding was at stake, he said.

Mr Justice Kearns said the importance of the issues raised in Ms Collins case had only fully emerged at the actual hearing before the judge of an earlier challenge by businessman David Hall to the promissory note payments.

Mr Justice Kearns had ruled Mr Hall did not have the necessary legal standing to bring the case. A date for Mr Hall’s Supreme Court appeal against that ruling has yet to be fixed.

When ruling on Mr Hall’s case, Mr Justice Kearns also expressed views on some of the other issues raised by the businessman. In those circumstances, the judge said he considered he himself should not be part of the divisional court to hear Ms Collins’ challenge.

Had he been aware prior to hearing Mr Hall’s case of the importance of the issues, he would have arranged for a divisional court to also hear that case, the judge added.

In her action, Ms Collins, who represents Dublin South Central, claims the €25m promissory note payment scheduled for June 17th, proposed as part of the € 31 billion recapitalisation announced by the Minister for Finance in 2010 of the former Anglo Irish Bank, Irish Nationwide and the Educational Building Society, is unlawful and unconstitutional.

She contends the promissory note payments are a profound attack on the democratic nature of the State because they amount to an appropriation of public monies which was not authorised, as required by the Constitution, by a vote of Dail Eireann.