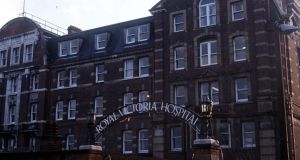 The teenager, who is from the village of Belcoo in Fermanagh, is currently being treated in Royal Victoria Hospital in Belfast.

A 13 year-old boy remains in critical condition following an alleged assault at a school in Fermanagh on Monday.

Police received reports of an incident which left Oisin McGrath hospitalised on Monday afternoon. A 17-year-old boy was later arrested in connection with the incident involving the St Michael’s College Enniskillen pupil, and has since been released on bail pending further enquiries.

The injured teenager, who is from the village of Belcoo in Fermanagh, is being treated in Royal Victoria Hospital in Belfast.

In a statement the Belcoo O’Rahilly’s GAA club has urged members to pray for him.

“The club asks all its members to keep Oisin McGrath in their thoughts and prayers.

“Oisin is the 13-year-old son of our secretary Sharon and her husband Nigel, and is a key member of our U14 side.”