Profile: The man who fired 40 shots while barricaded in Dublin property for 13 hours 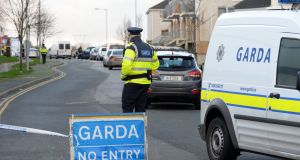 Gardaí at the scene of the siege in the Deerpark housing estate in Tallaght, Dublin. Photograph: Eric Luke

A man being questioned about an armed siege during which some 40 shots were fired has served many prison sentences for violent crime.

He surrendered to gardaí on Sunday afternoon after firing indiscriminately from inside a house on the Deerpark housing estate in Tallaght, Dublin.

The siege began at about 2.30am on Sunday and ended some 13 hours later.

The suspect surrendered less than an hour after his partner was taken to the scene under Garda escort to appeal to him to surrender.

The armed man had fired shots through all of the windows at the front of the property, blowing out the glass and parts of the window and door frame in the process.

The same neighbour said the man’s partner lives at the house where the siege took place with her two children, adding that the suspect is the father of one of the children.

“She was dreading him coming out of jail so we were surprised to see him back with her. There was a lot of rows going on and that seems to have set this off.”

The Irish Times understands the woman took her two children from the house late on Saturday night and contacted gardaí in Tallaght early on Sunday morning to report a domestic disturbance at her home.

The uniformed gardaí who arrived on the scene first were unarmed and retreated immediately the shots were fired.

They requested back-up, with armed detectives and the Emergency Response Unit arriving at the scene a short time later.

Many neighbours were unaware of the incident until after first light on Sunday morning when they saw armed gardaí outside their homes.

Some houses were evacuated in Deerpark Square, where the siege unfolded, and access roads were blocked off as Garda negotiators tried to persuade the man to give himself up.

Local people said between 30 and 40 shots were fired from 2.30am on Sunday through to the early afternoon.

After surrendering, the suspect was arrested and taken to Tallaght Garda station, where he was still being held last night.

He has a long criminal history dating back to the late 1980s and has served jail terms for drug-dealing, armed robbery and violent attacks.

Now in his mid-40s, one trial heard he had been in care homes from the age of five and had progressed to prisons in his teens.

He had never gone to school and has a history of drug and alcohol addiction.

He was once jailed for eight years after being found with heroin valued at €45,000 and told a judge he did not mind going back to prison because he had been homeless for periods in his life.

He has also served a five-year jail term for bank robbery, claiming he had only carried out the crime to pay for his girlfriend’s funeral.

He had been jailed for punching a journalist in the face because he saw her taking notes during a court hearing relating to an armed robbery he had been involved in.