Inspector expresses grave concern about other jails he is now investigating 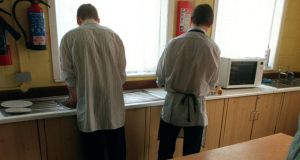 The Home Economics class at St Patrick’s Institution. Some prisoners were found to have stale food in freezing cells with dirty bed linen.

The Government has been forced into closing St Patrick’s Institution for Young Offenders after a series of surprise visits to the jail by Inspector of Prisons Judge Michael Reilly unearthed “very disturbing” conditions.

His findings, published in his annual report yesterday, came less than six months after the publication of an earlier report in which he exposed a bullying culture where some staff were physically abusing young prisoners and contravening their human rights.

Some prisoners were found to have stale food in freezing cells with dirty bed linen and were wearing their clothes in bed to keep warm; some mentally ill prisoners were not in receipt of their medication; and no records of some strip searches had been kept.

Shut in six months
Judge Reilly has recommended the closure of the prison and dispersing of staff and prisoners to other jails. Minister for Justice Alan Shatter has accepted that recommendation, saying the prison will be closed within six months.

Mr Shatter said despite a new management team at St Patrick’s and efforts made to stem the inward flow of drugs,“it is disappointing and unacceptable to note the disturbing incidents of non-compliance with best practice and breaches of fundamental rights of prisoners identified by the inspector”.

He had appointed a projects board to oversee the closure of the prison over the next six months. All 17 year olds in St Patrick’s will be sent to a dedicated unit in Wheatfield Prison, and those aged 18-20 will also be housed in the west Dublin jail.

The buildings that make up St Patrick’s on the Mountjoy campus on Dublin’s North Circular Road will be incorporated into the Mountjoy prison.

In further embarrassment for Mr Shatter and the Government, Judge Reilly said he has concerns, in some cases grave, about conditions in the Dóchas Centre women’s prison on the Mountjoy complex, as well as in Wheatfield Prison and Castlerea Prison in Co Roscommon.

Surprise inspections
He has pledged surprise inspections much more regularly. He said the only reason he was not also recommending the immediate closure of Cork Prison was because the Government had planned to replace it.

Investigations by his officer are under way and the results of an examination of Limerick Prison are imminent.

In his annual report, Judge Reilly has expressed general concerns linked to those jails relating to overcrowding, drug rehabilitation services, drugs in jails, lower numbers attending education and the continued lack of in-cell sanitation in some jails. He also found a culture in which there was constant low-level abuse of prisoners and failure to attend to call bells when prisoners were seeking help.

Some 25 per cent of the prison population were housed away from others for their own protection. Many were locked up for 23 hours a day.

He found prisoners were often punished with loss of privileges for up to 60 days, which he said was far out of step with international best practice.

However, his report is not without praise for recent reform supported by Mr Shatter, director general of the Irish Prison Service Michael Donnellan and management at some jails. He praised the opening of the safety observation and close supervision cells, dedicated committal areas and high-support units.

Slopping-out progress
The progress in eradication of slopping-out in Mountjoy is praised, with Judge Reilly noting that when he asked in 2008 if it could come to an end he was told no.

The minister for justice in 2008 was the late Brian Lenihan. The head of the prison service was Brian Purcell, now secretary general of the Department of Justice.

The secretary general of the department in 2008 was Seán Aylward, ironically a former director general of the prison service who has since become Ireland’s representative on the Council of Europe’s Committee for the Prevention of Torture.