Boy (3) killed in Kimmage ‘not a stranger to anyone’, says father

‘Three years old, he didn’t do anything to anyone. What of that?’ asks Khalid Omran 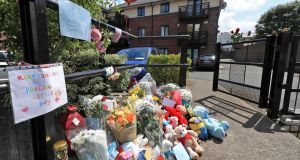 The father of a three-year-old boy killed in Dublin on Monday has said his son was a clever child who was “not a stranger to anyone”.

On Monday night emergency services were called to an apartment block in Poodle Park, Kimmage, south Dublin, where Omar Omran was found dead.

Omar’s mother, Maha Al-Adheem a doctor from Iraq, was also found with stabs wounds in the apartment by emergency services. Omar was pronounced dead at the scene, and the mother was taken to St James’s Hospital for treatment on Monday night.

The boy’s father, Khalid Omran, who arrived in Ireland on Tuesday, said “my heart is gone”, when speaking to the Star newspaper on Wednesday.

“Three years old, he didn’t do anything to anyone. What of that? I have no life now,” he said.

Mr Omran is believed to have been estranged from his wife, and was living in northern Iraq. The man said he had not seen his son in more than a year.

The three-year-old boy is thought to have had autism.

A woman in her 40s who was arrested on Wednesday in connection with the child’s death will appear before the Criminal Courts of Justice today.

The Riverside apartment development in Kimmage has CCTV cameras positioned at the complex’s entrance. It is understood there was no signs of a break-in at the apartment and only one suspect was being considered by gardaí in relation to the boy’s death.