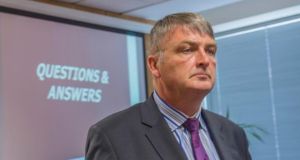 Garda Síochána Ombudsman Commission chairman Simon O’Brien will step down from his position at the end of January. Photograph: Brenda Fitzsimons

Head of the Garda Siochana Ombudsman Commission (Gsoc), Simon O’Brien has announced his resignation despite two years remaining on his contract.

The Association of Garda Sergeants and Inspectors and the Garda Representative Association had previously called on him to resign over his handling of a number of contentious events.

After an often controversial period in charge of the body that investigates the Garda, Mr O’Brien is to step down at the end of this month.

From the UK, where he worked as a police officer in the London Met, Mr O’Brien said he has decided to return to his homeland to take up the role of chief executive of the Pensions Ombudsman Service from February 2nd.

“I have been in Ireland for five years in two posts,” he said referring to his tenure as deputy chief inspector of the Garda Inspectorate before assuming the chairman’s role at Gsoc in December 2011.

“This is a significant opportunity and I am looking forward to the new challenge. The new post will bring me back home to be with my wife and young family in London.”

During Mr O’Brien’s term at the head of Gsoc, which coincided with former garda commissioner Martin Callinan’s leading of the Garda force, the already strained relations between the organisations reached an all time low.

Twelve months ago it emerged Gsoc had had a security sweep conducted of its offices, with the audit identifying possible signs its offices were bugged.

When Gsoc released a statement that Mr Callinan claimed implicated the Garda in the suspected bugging, a major policing and political crisis ensued.

The decision by Gsoc against bringing its concerns to the then minister for justice Alan Shatter and the Garda when the security sweep was conducted was seen as very controversial.

For many observers it underlined the distrust at the heart of the relationships between Gsoc and the Department of Justice and Gsoc and the Garda.

The story of Gsoc’s bugging suspicions broke in January 2014 and intensified a troubled period in Justice and policing.

It was then exacerbated by the Garda whistleblowers and would eventually see Mr Shatter and Mr Callinan leave office.

Under Mr O’Brien, Gsoc was also highly critical of what it said was the unwillingness of the Garda force to cooperate with its inquiries.

In 2013 its longest ever investigation into allegations that drug dealer Kieran Boylan, while working as a Garda informer, had serious charges against him dropped and was allowed to deal drugs with the Garda’s knowledge, came to nothing.

Gsoc at the time said the Garda had deliberately set out to grind the investigation to an effective halt; comments that were rejected strongly and publicly by Mr Callinan, with Mr Shatter stepping in to try to diffuse the dispute.

At the conclusion of the Boylan probe, Gsoc found that key recommendations around the handling of criminal informants arising from the Morris Tribunal into Garda corruption in Donegal were not acted on at the time and have still not been acted upon.

It added gardaí had “withheld” evidence from it and this was “unacceptable”.

“It also has impacts adversely on the ability of the Ombudsman Commission to fulfil its statutory functions,” a report released by Gsoc at the time said.

“The absence of contemporaneous notes by members of the Garda Síochána made it difficult, and on occasion impossible, for the Ombudsman Commission to establish the truth in relation to key incidents and events.”