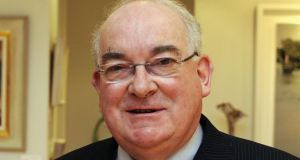 Senator Paul Coghlan, chairman of the British Irish Parliamentary Assembly Committee: said there were so few police on the ground in south Armagh that those involved in the illegal trade could “carry on regardless”. Photograph: Dave Meehan

A shortage of police resources in south Co Armagh is hindering the fight against fuel smuggling, a Fine Gael senator has claimed. Paul Coghlan, chairman of the British Irish Parliamentary Assembly Committee, told a meeting of Louth County Council that there were so few police on the ground in south Armagh that those involved in the illegal trade could “carry on regardless”.

The committee recently published a report on cross-Border criminality, including fuel smuggling, which followed a number of fact-finding visits to border areas by Mr Coghlan and other committee members.

It has recommended the establishment of a multi-agency cross-Border taskforce to tackle the problem of fuel laundering, which costs the exchequers in Ireland and Britain millions in lost excise duty. County councils in Louth and Monaghan have had to bear the cost of dealing with toxic sludge dumped by the fuel smugglers.

Mr Coghlan yesterday briefed a meeting of the council on the committee’s findings and told them that a senior source in the North had described the level of policing in south Armagh to him as little more than “a token presence”.

Fine Gael councillor Johnny McGahon told the meeting that some of the country roads in north Louth were like highways, such was the amount of tanker traffic on them.

Green Party councillor Mark Dearey said fuel smuggling was striking at the very core of the local economy. Not only was the fuel being laundered, but proceeds of the crime were being laundered, which then affected the property and retail sectors.

Fianna Fáil councillor Declan Breathnach said a rebate for farmers was the only way to address the problem, as those involved in illicitly washing the dye from agricultural diesel were able to respond to changes in fuel markets.