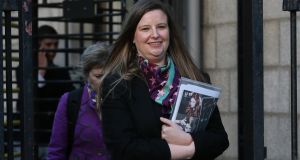 A Scottish not-for-profit theatre company has been ordered by Dublin District Court to pay €1,500 after it used a copyright photograph of poet Dylan Thomas without seeking permission.

The photograph, owned by Pablo Star Media Ltd, shows a young Dylan Thomas playing croquet, and is thought to be one of the first images of the Welsh writer with his future wife Caitlin.

It was agreed by both parties the image was used on the theatre company’s Storify social media page, which had seven followers at the time, as part of a promotion for a series of plays scheduled to coincide with last year’s Commonwealth Games in Glasgow.

It was also accepted the Tron company had not asked for permission to use the image prior to being contacted by Pablo Star owner Haydn Price on January 2nd this year when he asked for it to be taken down.

The group acceded to his request on January 6th but Mr Price told the court he still wanted to pursue damages as part of his “zero tolerance” approach to copyright infringement.

Stephen O’Sullivan BL, counsel for Tron, said his clients embedded the photograph on their social media stream directly from an Italian blog which had already been in contravention of intellectual property laws. He said damage was mitigated by the fact no-one in Ireland had seen the offending post.

Mr Price said although his business was based in the UK, it had an Irish office and the copyright was registered in Ireland, thereby allowing him to take a case in this jurisdiction.

He said he had already taken eight similar cases in Irish district courts protecting his intellectual property, including a number of previous cases involving the same photograph. He said he wanted to protect its integrity as he wanted to “develop a whole brand around the image” including stationary and notebooks alongside other “studenty, middle-class giftware”.

He said that as last year was the centenary of Thomas’s birth, “as an industry, Dylan [Thomas] is more popular today than when he died”.

“My view is that they did use it for commercial purposes because ultimately they were promoting their theatre,” he told the court.

“I have to polish this image and get rid of the people who are infringing, then I’ve got 20 years to exploit this image properly,” he said, in reference to the copyright expiry date.

Judge Deirdre Gearty said it was an “innocent mistake” on behalf of the theatre company and there was no malfeasance.

“I do believe that there has been an infringement, albeit an innocent infringement of rights. I’m satisfied that the claimant has rights to the photograph… and those rights are registered in Ireland,” she said.

“His ownership and entitlement to same have not been disputed and I’m satisfied that they do exist.”

She awarded €1,500 to be paid by the theatre company, with a stay of 14 days pending appeal.