Scientologist admits complaint ‘could have been more temperate’ 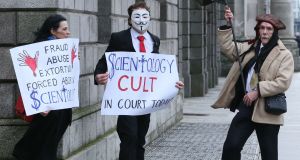 Anti-Church of Scientology protesters stage a demonstration outside the Four Courts in Dublin before an action involving a member of the church, Zabrina Collins. Photograph: Courts Collins

Zabina Collins, a leading member of the Church of Scientology in Ireland, has told a judge that an email she sent to a school principal complaining about a talk by a former church member “could have been a little more temperate”.

Ms Collins is being sued for defamation by the former church member, Peter Griffiths, of Cual Gara, Teeling Street, Ballina, Co Mayo, for what his counsel Séamus Ó Tuathail SC described as “a vicious character attack”.

Ms Collins sent an email to the headmaster of St David’s CBS in Artane, Dublin, after Mr Griffiths posted an audio recording of a talk on cults he had given to the school’s students on the internet .

She said that she sent the headmaster a link to an online video that included a picture of Mr Griffiths naked, with only a Guy Fawkes mask covering his genitals.

Ms Collins, of The Boulevard, Mount Eustace, Tyrrelstown, Dublin 15, told Judge James O’Donohue she had written to the school principal as a concerned parent and not to besmirch Mr Griffiths.

She earlier told her barrister Frank Beatty that while she did not have a child attending St David’s, she tutored children in schools on drugs awareness and felt she had a duty to complain.

In her email Ms Collins alleged that Mr Griffiths’s talk had centred on Scientology and accused him of “openly and viciously” slandering the church.

She accused him of being “an avid hate campaigner against Scientologists” and “hate mongering” against the church.

She also accused him of being under Garda surveillance.

The court heard that a teacher from St David’s had asked Mr Griffiths to address school pupils on cults.

The court was told that it was Mr Griffiths who had posted the recording on the internet.

The court heard that in the recording Mr Griffiths warned the boys of the dangers of getting involved with the Church of Scientology, saying that it might destroy their lives.

Mr Griffiths said he had been shocked, horrified and appalled when he was told of Ms Collins’s allegations, in which there was “not a grain of truth.”

He said her statements had lowered his reputation in the minds of right-thinking people, while holding him up to hatred, ridicule and contempt.

The judge has reserved his judgment on the defamation case, which he has heard over several days.