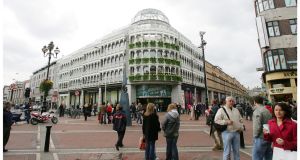 The Stephens Green Shopping Centre in Dublin where a proposal to hold cinema screenings on the top floor has been refused. Photograph: The Irish Times

A series of rooftop cinema screenings at Stephen's Green Shopping Centre which were expected to attract up to 7,000 attendees will now not go ahead after permission was refused by Dublin City Council.

The concept of the ‘Rooftop Cinema Club’ was developed by brand agency Outset, which in February applied for a planning exemption to set up a 350-capacity temporary venue in the car park atop Stephen’s Green Shopping centre for showings from 7th to 17th July, and possibly longer.

The events would have involved the erection of a movie screen on the corner section of the sixth-story open air car park overlooking the junction of Mercer Street and Glovers Alley.

Promotional literature included in the application to Dublin City Council describes the screenings to be held between the hours of 9pm and 11.30pm on the aforementioned dates as being aimed at a “professional, sophisticated audience” of 25 to 35-year-olds.

They would have involved patrons lying on sun-loungers with blankets placed on an astro-turf surface, and plans were also in place to make food and alcoholic beverages available.

The events had not yet been publicised pending the planning decision.

However, the plans have been scuppered for this summer at least after Dublin City Council decided the screenings would constitute a material change of use of the car park and refused permission for the exemption from the planning process.

This decision has now been appealed to An Bórd Pleanála but a ruling is not expected until the end of September, well after the proposed summer screening dates.

Even if the organisers were to submit a full planning application to the council it would likely take a number of months for the decision to be issued meaning the events are definitely off the agenda for summer 2017. A successful appeal may allow screenings to take place in summer 2018.

It is understood the specific difficulty regarding the St Stephen’s Green site is that the proposed location is zoned for a different use other than recreation, a complication which does not tend to arise in parks and other public spaces.

In the appeal document submitted to An Bórd Pleanála event organisers describe the screenings as having the capacity to “enhance the city centre recreational and tourism offer” in an otherwise underutilised space.

It adds the temporary outdoor cinema facility would contribute positively to the city’s cultural tourism amenities and would augment Dublin’s image as a place to live and visit.