‘I feel really sorry for him for what happened... but I’m not involved in his assault’ 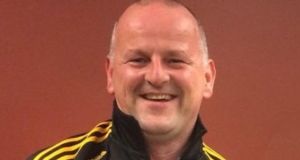 Sean Cox was seriously injured before a Champions League semi-final

A Roma fan accused of a joint attack on Irish Liverpool supporter Sean Cox outside Anfield football ground has told a court he was not looking for trouble and was just lost when disorder broke out.

Filippo Lombardi (21), from Rome, is accused of inflicting grievous bodily harm Mr Cox (53), ahead of the Champions League semi-final on April 24.

A jury at Preston Crown Court has heard that another man threw the punch which left the Irish father-of-three in a coma but Mr Lombardi is alleged to have swung his belt in Mr Cox’s direction at the same time, although it is not clear if the belt made contact.

The jury has been told that Mr Cox, from Dunboyne, Co Meath, is unable to talk or sit up unaided following the attack.

On Monday Mr Lombardi told the court: “I feel really sorry for him for what happened, it’s a very, very horrible situation for them, but I’m not involved in his assault.

“I didn’t see him when he was standing and I didn’t know the man who hit him.”

Mr Lombardi said he had swung the belt at a man standing behind Mr Cox’s brother Martin, who he believed was being aggressive towards him.

Mr Lombardi, who walked from Liverpool Lime Street railway station to the football ground with a group of supporters, said he had taken his belt off before getting to the stadium.

He said: “I saw a few of the Liverpool fans in front of one pub and they started to tell me something, but I didn’t understand what they said.

“I realised they weren’t friendly and for that reason I understood that near the stadium could be a dangerous situation and therefore I took off my belt and wrapped the belt around my hand.”

He said he had the belt wrapped around his hand when he walked into Walton Breck Road, which was full of Liverpool fans.

He said: “I was lost because I didn’t know the right way. I thought that in this street could be a dangerous situation so I wrapped the belt around my hand.”

But he told the court he unwrapped the belt when a man with a white scarf started talking to him aggressively.

He said: “He started to tell me, I didn’t understand what he said, but something like ‘Fight’ and this moment I unwrapped the belt off my hand.”

He demonstrated a sideways swipe motion he had made with the belt towards the man.

He said: “I didn’t hit him and I didn’t want to hit him, just get him away from me because I think he started to tell me something aggressive.”

Mr Lombardi said it was only after he swung the belt that he saw Mr Cox lying on the ground.

“I didn’t realise what happened because I didn’t see,” he said.

The defendant, who has admitted a charge of violent disorder, told the court he had then become involved in a fight with another man who, he said, covered his face and started a confrontation.

He said: “I realise that I have done a mistake being violent in this situation.”

Asked by Alison Gurden, defending, if he had been looking for trouble, he said no.

Mr Lombardi, who had an Italian interpreter in the dock with him but understood and spoke English most of the time, told the court his cellmate in prison was a Liverpool fan and they were friends.

The court heard that he usually went to Roma games every weekend and had been to Europe to watch them play about 10 times before but had never been arrested or involved in football-related disorder in the past.

The trial was adjourned until Wednesday, when the jury is expected to hear closing speeches. -PA