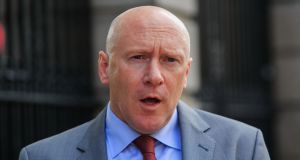 Licensed Vintners’ Association chief executive Donal O’Keefe: “There have been 3,500 food pubs open since June 29th without any problems. What is NPHET’s obsession with wet pubs?” Photograph: Gareth Chaney

The representative body for the Dublin pub trade has warned that a further delay in reopening “wet pubs” in the city would be “an unmitigated disaster” for the sector, pushing some publicans into default on mortgages as Covid-19 payment breaks are due to expire at the end of the month.

Licensed Vintners’ Association chief executive Donall O’Keeffe said it would be “unbelievable” for the reopening of non-food Dublin pubs to be further delayed past September 21st, the fourth proposed reopening date. He called on the Cabinet to stand by that date.

Pubs which do not serve food are due to reopen on September 21st but public health experts have said restrictions may be necessary to control high rates of infection in Dublin.

“NPHET [the National Public Health Emergency Team] should focus on where the infections are,” Mr O’Keeffe said.

“These pubs have not contributed to that worrying trend of rising infections. That has happened in homes, in the community and in other workplaces because the pubs will have been closed for 189 days by September 21st,” he said.

“All hospitality businesses should face the same public health guidelines. There have been 3,500 food pubs open since June 29th without any problems. What is NPHET’s obsession with wet pubs?”

Separately, intensive care consultant Catherine Motherway warned there could not be a return to the packed pubs of the past.

Dr Motherway, who is past president of the Intensive Care Society, said she would prefer to see people gathering in a controlled manner in small groups.

The level of intensive care beds in the country remained an issue of concern, she added, and any expansion in such numbers would be welcome in the national plan due to be announced on Tuesday.

She told RTÉ radio’s Morning Ireland programme that the rise in the numbers of people contracting Covid-19 in recent weeks had been predominantly among younger people who did not need the same levels of hospitalisation, which was good, but there remained the fear that the virus could spread in the community to more vulnerable people.

While the vulnerable have got better at protecting themselves, there remained a risk, Dr Motherway said.

The survival rate in Ireland’s intensive care units for Covid-19 patients was good, she said, at 79 per cent, which compared well internationally.

Dr Motherway said she was confident the Health Service Executive was committed to improving intensive care bed capacity, but the lack of ICU beds was one of the reasons why there had been such a severe and prolonged lockdown.

The consultant, who is based at University Hospital Limerick where she has not seen a Covid-19 case in the intensive care unit for some time, called on people to gather in a controlled manner. It was uncontrolled indoor gatherings that were the problem, she said.

While we needed to get back to some sort of normal life, it was not going to be the same as before. There could not be a return to packed pubs, she said.

Number of H1 grades would have been ‘untenable’ without standardisation - Foley 06:27
Coronavirus: Indoor dining, sports, weddings, funerals, travel to be hit as Dublin set for Level 3 06:23
Climate predictions for Ireland by 2050 come with unprecedented detail 03:02
East to get warmer as Ireland's climate to change dramatically by 2050 03:01
More than half of young people ‘confused’ about sexual consent - report 01:07

1 Coronavirus: Indoor dining, sports, weddings, funerals, travel to be hit as Dublin set for Level 3
2 Cluster among golfing group in Midlands a 'significant Covid-19 incident'
3 Life in Level 3: What will happen under new restrictions in Dublin?
4 English ‘chumocracy’: Boozy weekends and class disdain with the Camerons
5 Coronavirus: NPHET recommends ban on indoor dining in Dublin
Real news has value SUBSCRIBE