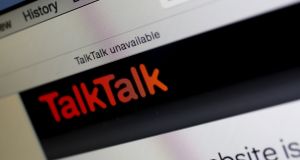 A statement issued by the Met on behalf of TalkTalk acknowledged it was a “worrying time” for customers following the data breach in which customer names, addresses and partial bank account details were allegedly stolen. Photograph: Stefan Wermuth/Reuters

A 15-year-old boy is being questioned by police in the North in connection with the TalkTalk data theft cyberattack.

The Metropolitan Police in London said the teenager was detained in Co Antrim at about 4.20pm on Monday by officers from the Police Service of Northern Ireland on suspicion of Computer Misuse Act offences. A search of an address was being carried out and “enquiries continue”,a Met police statement said.

The boy is understood to be from the Ballymena area of north Antrim. His arrest is part of a joint operation between officers in Northern Ireland and Britain, also including National Crime Agency staff.

A PSNI spokeswoman was last night unable to provide comment, as she said the Met cybercrime unit was leading the investigation into the major security breach of the telecoms company. The phone and broadband provider has four million customers. It emerged last week that the personal information of an unknown number of customers could have been compromised during a major cyberattack on its website.

A statement issued by the Met on behalf of TalkTalk acknowledged it was a “worrying time” for customers following the data breach in which customer names, addresses and partial bank account details were allegedly stolen. “We know this has been a worrying time for customers and we are grateful for the swift response and hard work of the police. We will continue to assist with the ongoing investigation,” it said.

North Antrim MP Ian Paisley, who received a briefing on Monday from police in relation to the security breach, welcomed the boy’s arrest. He said the security breach had concerned people across the UK and he would be seeking updates as the investigation progresses.

“The type of attack suffered by TalkTalk once again highlights the significant danger that cybercrime poses and the impact that it can have on the community,” he added. “Virtually every household will have banking or other personal information stored by companies on computer systems and should those systems be compromised it can leave people vulnerable to a range of crimes.”

TalkTalk said company executives are to be called to appear before MPs to explain how hackers were able to steal customer details.