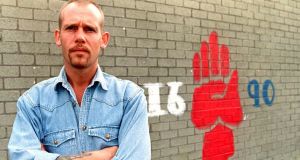 Northern Ireland’s chief constable has expressed regret over the police’s handling of a controversy around the erection of a poster celebrating a notorious loyalist killer.

A local PSNI commander in Co Tyrone faced intense criticism last month when he claimed the police could not take action against the Billy Wright tribute in Dungannon because officers had to balance the rights of one community over another.

The poster carried a quote attributed to the late loyalist leader praising a gun attack carried out by his Ulster Volunteer Force (UVF) gang that claimed the lives of four people - three of them IRA members - in a bar in Cappagh, Co Tyrone, in 1991.

Insp Keith Jamieson’s justification for not removing the poster was condemned by nationalists, who claimed no one had a right to gloat over murders. They also questioned the inference that such a quotation was endorsed by the unionist/loyalist community.

During the August meeting of the Policing Board in Belfast, Chief Constable George Hamilton suggested the inspector had chosen the wrong words.

“I do accept that the initial press statement issued by the local inspector, in good faith by him, but that it has caused hurt and it has caused offence and probably with hindsight we would not have used the words that were used,” he said.

Mr Hamilton said the inspector had been keen to “put it right” through dialogue with the local community. The poster has since been taken down.

“We want to learn, we want to be sensitive to people, when we get it wrong we’ll say so, when we reflect and think of a different way of doing things we’ll try to apply that in the future.”

SDLP board member Nichola Mallon said the police’s response had caused “deep hurt” to families of the four murder victims, offended the wider community and damaged confidence in community policing.

“What community or individual has the right to erect a poster glorifying the murder of four human beings?” she asked.

But he told the board that legal advice received by the PSNI indicated it did not break the law.

He said there was no evidence of an escalation of hatred in the area, which would have allowed prosecution for the offence of stirring up hatred, and he explained that a charge of glorifying terrorism only referred to encouraging future attacks, not reflecting on historic ones.

“The advice I got, and I took it from lawyers, was there was no contravention of the law, as distasteful as that was,” he said.

Mr Hamilton laid a challenge to the political members of the board, stressing that if they wanted tougher laws around such matters they had to legislate for them.

“If the legislators in this room and at Stormont want to bring clarity to this law, that it isn’t exactly fit for purpose, if they want to bring more rigour and robustness and strengthen the law around this, that would be really helpful for us,” he said.

Democratic Unionist board member Nelson McCausland highlighted that there were multiple permanent memorials in Northern Ireland that commemorated the actions of the IRA.

“I am not an advocate of any celebration of terrorist or paramilitary activity - whatever the community or background or organisation,” he said.

Mr Martin said police often were left dealing with what was a “societal and cultural” problem.

“We have conundrums and challenges every day,” he said.

“All around Northern Ireland there are memorial parks; there are play parks named after people who have been controversial; this week we have seen the 66 Days film [about hunger striker Bobby Sands] raise issues with one part of our community, and talk about retraumatising; we have books written; we have flags; we have memorials all across proscribed organisations, to ‘volunteers’ - all of which actually fall into the same type of consideration as this Billy Wright flag.

“Many people will find it distasteful and will find it offensive but I have to decide police action based on the law - and is there a contravention of the law.”