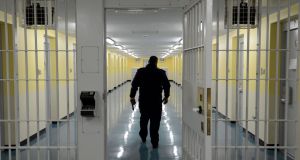 A group appointed by Government to visit prisons and report its findings has praised the rate of change at St Patrick’s Institution for Young Offenders last year.

The commendation is in stark contrast to an unrelated report on the jail by Inspector of Prisons Judge Michael Reilly in July which identified problems so serious that the Government has agreed to close the facility.

Executive director of the Irish Penal Reform Trust Liam Herrick said visiting committee members were appointed by the minister for justice of the day to visit prisons but ultimately had no power to reform.


Concern
He expressed concern that the visiting committees of some jails, including St Patrick’s, had reached much more favourable conclusions about prison conditions than Judge Reilly had in recent years with his investigative powers.

“The committees are not a replacement for putting in place a real complaints mechanism and the oversight that would bring,” Mr Herrick said.

“In the programme for government, there were commitments to reform this area, and to bring the visiting committees under the remit of the Inspector of Prisons and to make them stronger.

“The disappointing thing for us is that in his remarks when publishing the new visiting committee reports, Mr Shatter makes no reference to the reforms that were promised.”

In those remarks, the Minister for Justice reiterated the Government’s commitment to closing St Patrick’s, which is on the Mountjoy campus in Dublin’s north inner city.

He said work was under way to create a dedicated unit at Wheatfield Prison, west Dublin, for the young offenders, aged 17 - 21, that would be displaced by the closure of St Patrick’s.

Mr Shatter welcomed the broadly positive comments in the six visiting committee reports, saying he was particularly pleased with favourable comments on the refurbishment of Mountjoy Prison, which will end slopping out in coming months.


Undermined
However, the failure of the St Patrick’s committee to notice and record the major abuses unearthed by Judge Reilly over the same period of review has further undermined the visiting committee process.

The prison visiting committee of St Patrick’s singled out management at the prison for praise.

“We are confident that St Patrick’s continues to be well managed by a professional governor and staff,” it said.

It then adds that issues of bullying and cruelty towards some young offenders by staff that had been unearth by Judge Reilly’s report last year had been prioritised.

“The challenge of the cultural change identified as a priority . . . will take time, progress is being made.”

In Judge Reilly’s report in July on the Dublin prison, he reassessed his grave concerns raised in his earlier report in late 2012.

In the latest report, the judge found a prisoner in a “filthy” committal area cell with “a considerable quantity of stale food” on the floor.

The space also contained a broken toilet “filthy and full of old excrement”. In another case, a psychiatrically ill prisoner was found in a holding cell shaking with cold as the window was stuck open. He had not been given his medication and had not been allowed to phone his family.

The Mountjoy visiting committee sounded a “positive note” about developments at the Dublin prison.

It noted B wing had opened and the “depressing” A wing had now closed for complete refurbishment.

This just left D wing for refurbishment in the main prison and it was hoped this would commence this year.

The committee complimented the prison’s management on the opening of A wing, which it described as “ comfortable, bright, warm, single-cell accomodation”.

“When D wing is refurbished, it would mean the end of slopping out in Mountjoy - a historical moment we will all welcome. Indeed the improvements in the prison for the last 24 months have been quite substantial. Many of the improvements the committee recommended over the last six or seven years, are being attended to and we are promised many more over the next 12 months.”

The committee said it was important to remember that prison was meant to remove the offender from the public, thereby protecting the public.

“However there is little to be gained from this protection if all we are doing is warehousing prisoners with no rehabilitation.”

It said there should be compulsory classes or talks on the effects of offending behaviour.

“Because someone is sent to prison does not relieve us of the necessity of recognising the benefits of education, and the obligation for the provision of that which is available to the general public.”

A visiting committee report for Loughan House in Co Cavan found the house, grounds and environs of the prison were at all times in good condition on unannounced inspections.

It found the kitchen staff to be “professional, highly trained and motivated” and said the kitchen also provided great opportunity for offenders to learn the art of catering.

The committee said Loughan House remained “a very valuable and worthwhile facet of the Prison Service.

Staff were courteous and helpful and the relationship between officer and offender was “different and better than that which would be possible in a bigger, closed institution”.

“This relationship, we feel, is a contributor to the fact that self-harm and suicide attempts are not prevalent in Loughan House.”