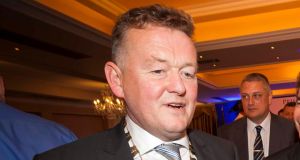 
The Prison Officers Association is preparing to ballot members on strike action and has said if the deal it reached on the failed Croke Park extension is not honoured under any new agreement it will take industrial action.

At the opening of its annual conference in Athlone, Co Westmeath, last night, POA president Stephen Delaney sent a clear message to the Government that the association was serious in its threat to strike.

“The Prison Officers Association will engage in finding a solution, but let’s be crystal clear, we will not support any measures which are more stringent than the package of proposals that was already reluctantly accepted by our members. That is our position, which is non- negotiable.”

The association is the latest to put in place plans that could lead to strike action in the context of the Government’s efforts to reach a deal with unions aimed at finding €300 million in savings following the collapse of the Croke Park II deal.

The POA had reached a deal that officers were very satisfied with in that it protected many of their existing allowances at current levels.

However, when the Croke Park extension was rejected by public service unions the future of the terms secured by the prison officers were thrown into doubt.

Industrial action
Mr Delaney said an emergency motion on industrial action, up to and including striking, would be put to delegates at the conference today and tomorrow.

He said his association would “do what needs to be done” to avoid further pay cuts to its members.

“Five years of austerity has had a massive impact on prison officers and their families. Many are hurting and are under great financial pressure. A certain percentage of our members already have difficulty making ends meet, and this will increase if there are further cuts.

“Increasing numbers will have trouble with mortgages, they will be spending less in their communities – so instead of making a good and sound contribution, as they always have done, they will now become part of the economic problem.”

Good deal
He said Minister for Justice Alan Shatter had a responsibility to ensure a good deal for prison officers.

While some senior bankers were still earning over €800,000 per year, his members had met targets of saving €21 million from their payroll.