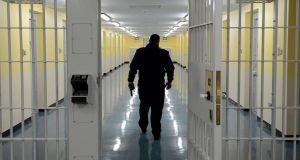 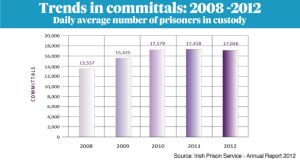 The number of committals to Irish prisons has fallen for the first time in six years as sustained decreases in the Republic’s recorded crime rates appear to be filtering through to the jails.

The number of committals last year was 17,026, a reduction of 1.7 per cent on the previous year. The fall, while modest, follows a 45 per cent increase in committals in the five-year period from 2007 to 2011.

The average number of prisoners in jail on any one day has also declined, to 4,318 last year from 4,390 the previous year. Some 85 per cent of those sent to jail last year were men and 15 per cent women.

The number of people committed to prison for non-payment of a fine last year increased 10.5 per cent to 8,304. This equated to an average of 18 fine defaulters being in jail on a given day.

The average cost of keeping a prisoner in jail for the year was €65,404, in line with costs in the previous year.

The new figures have emerged in the 2012 annual report of the Irish Prison Service which was published this afternoon.

A new joint strategy document was also published by the prison service and Probation Service under which an early release scheme for low risk offenders is to be continued after a successful trial period.

Some 299 prisoners were released early under licence after they agreed to engage fully and properly with the Probation Service as per the terms of their release. Of these, 90 per cent complied with the conditions of their release while 10 per cent did not and were returned to jail.

Under the joint prison and probation strategy, a further 300 prisoners will be released under licence this year. The strategy also makes pledges to increase the range of non custodial options run by the prison service, aimed at encouraging the courts to sentence people to community service in place of very short sentences for mostly minor offences.

The strategy also includes pledges to focus more in non-custodial options specifically designed for the increasing number of female offenders being sent to prison and also to establish step-down facilities into which they could be released and supported in the hope they would not reoffend.

Some of the main points of the prison service report include:

· In 2012 there were 400 committals in respect of immigration issues involving 385 detainees. This represents a slight decrease on the previous year (423 committals involving 395 detainees). The average daily number of persons in custody under this category was 8.

When the traditional snapshot of prison population was taken on November 30th last, the total for the number of persons in custody was 4,298, down 0.3 per cent on the previous year.