Postmortem due on man who died on finding intruders 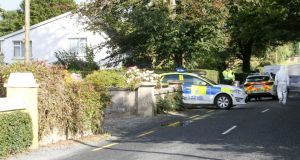 The scene outside a house in Doon in Co Limerick where the body of John O’Donoghue (62) was found following a suspected burglary. Photograph: Liam Burke/Press 22

A postmortem is due to be carried out on Friday on the body of a 62-year-old man who is believed to have suffered a heart attack after discovering two intruders in his home.

John O’Donoghue arrived to his house at Toomaline outside Doon in Co Limerick shorty before 2pm on Thursday to discover two men inside his home.

The men who had ransacked the house fled via a back door when they heard Mr O’Donoghue arriving home.

It’s believed the shock of hearing the intruders in his home led to a heart attack and Mr O’Donoghue collapsed to the ground.

Mr O’Donoghue’s sister Christina, a retired nurse who recently moved home from abroad to live with him, tried to help the him until the paramedics arrived, but he died at the scene.

Local parish priest Fr Tony Ryan who administered the last rites to Mr O’Donoghue said the entire community is outraged by what happened.

“He had been working in his own house and was bringing back material to work on and was just coming and he noticed a car parked opposite [the house].

“The thieves came flying out of the house, he got such a shock he got a massive heart attack,” said Fr Ryan.

“He was a thorough gentleman, a most intelligent and inoffensive person and I want to extend my sympathy to all his family. He was self employed and a gifted and outstanding carpenter.

“The community is very upset, and the whole community is outraged at what happened. There have been a number of break-ins in the area recently, but Doon is a flourishing community with great people,” said Fr Ryan.

The men are cousins in their 20s from Limerick and Dublin and are understood to be members of the Traveller community.

They are suspected of being involved in a number of other burglaries in the Cappamore/ Doon area, earlier that [Thursday day.

A third man - the getaway driver - is still being sought by gardaí in connection with the robbery.

A Garda spokesman would not comment on reports that they were arrested by a Garda travelling in his own car as no patrol car was available.