Policing a ban on street drinking ‘a non-runner’, say gardaí 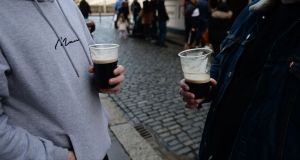 Gardaí were perplexed by the Government proposal, now abandoned, to introduce new controls on the consumption of takeaway pints from pubs, according to members of the force who have spoken to The Irish Times.

One senior officer said he was “stunned” at what he saw as “such a knee-jerk reaction” to a video of revellers on Dublin’s South William Street at the weekend.

“It’s a sad day when the Government is deciding it should make a huge change to the policing strategy so far based on a video on Twitter rather than even consulting with the depot,” he said, the latter a reference to Garda Headquarters.

The video shared on Twitter depicted hundreds of people gathered on South William Street, and streets off it, drinking on Saturday evening.

After the video went viral, Minister for Health Stephen Donnelly drew up proposals for the curtail the circumstances in which people could gather to drink alcohol.

The proposals brought to Cabinet would have made it an offence, punishable by an €80 fine, for two or more people to gather outdoors where one of them is drinking alcohol.

However, there was resistance from the Greens and Fine Gael at the Cabinet table, and it was decided there was not sufficient support for the measure to proceed.

“It was the Government’s own decision to allow takeaway pints,” one Garda source noted. “It seems pretty strange that because of a video of one incident that they’d decide to change the law. There’s not one rule or law that’s complied with 100 per cent of the time.”

Another agreed, saying: “The Government should be trying to bring a bit of perspective rather than rushing in to change laws when something blow ups on Twitter. They’ve only created hysteria.”

Under the law, which predates the pandemic, it is illegal to drink alcohol in public, though that law is rarely enforced.

“Essentially the only law or Covid-19 regulation (the revellers in the Twitter video) were breaking was drinking alcohol in public,” said one Garda member. “If we were going to move in and prosecute every person we see drinking in public we’d lose the general public pretty fast.

“The type of resources you’d need to move in on a crowd of 100 or 200 to prosecute them would be huge; you’d need hundreds of gardaí and dozens and dozens of vehicles. It’s a non-runner and nobody wants that kind of policing in Ireland - rounding up people for drinking a few pints the law lets them buy.”

When asked if gardaí could take up a position on South William St, as crowds of revellers had gathered there frequently to drink during the pandemic, and move people on as they gathered, Garda sources said this would be seen as heavy-handed.

“So far it has all been about engaging with people, explaining the rules and public health advice and encouraging them to comply,” said one senior garda. “We have been told by everyone – Garda management, the Government, the Policing Authority, civil rights groups – that enforcement should only be used in extreme cases.

“The fact here is that young people who gathered on a street, and moved on when they were asked to, is not an extreme case. So it was surprising to see that kind of nuclear button thinking from the Government over a video on Twitter.”

Another Garda member agreed, saying it was inevitable the legislation allowing for takeaway drinks would be occasionally abused and that it should not cause panic.

“We are going to have incidents like this from time to time for as long as this pandemic lasts. The alternative is to ramp up the rules and ramp up the enforcement. That would be a huge mistake and nobody wants that. The Government and the Policing Authority are the very people who had told us again and again they don’t want that.”