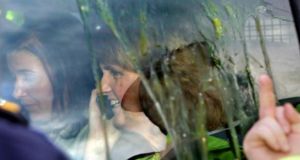 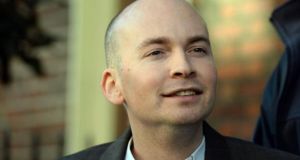 Socialist TD Paul Murphy who is one of four people being questioned in connection with an incident in Jobstown in November 2014. 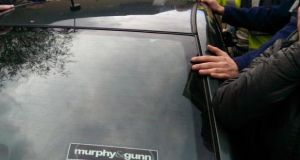 A car carrying Tánaiste Joan Burton is seen surrounded by protestors in Tallaght in November, 2014. 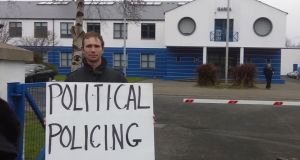 Anti Austerity Alliance councillor Kieran Mahon holds a sign after his release from Tallaght Garda station where he was questioned about an anti water charges protest in Jobstown last year. Photograph: Ciaran D’Arcy 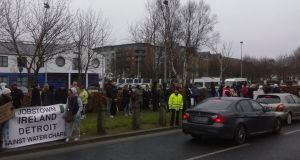 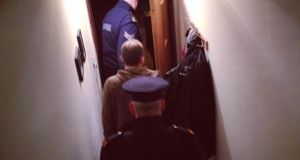 A picture posted on the Workers Solidarity Movement’s Facebook page, which the group says shows Paul Murphy being arrested by gardaí this morning. Photo by Farah Mokhtareizadeh 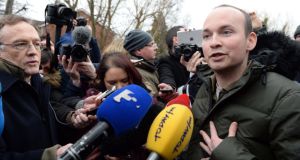 Socialist Party TD Paul Murphy has said his arrest in connection with a protest that trapped Tánaiste Joan Burton in her car for a number of hours was designed to “damage” the anti-water charges movement.

Mr Murphy was arrested yesterday following a Garda investigation into a protest in Jobstown in November. During the demonstration, Ms Burton was struck by a water balloon, while members of her team alleged they were “badly kicked and beaten” as gardaí escorted them from the area.

Addressing reporters after his release yesterday, Mr Murphy said six gardaí arrived at his home at 6.55am and took him to Terenure Garda station where he was held and questioned until about 3.30pm.

Targeting “[It] was an exercise in pure political policing, designed to damage the anti-water charges movement, targeting the Anti- Austerity Alliance in particular,” he said. “There is no basis for these charges, so let them charge us. Let’s have a court case, let’s have a jury, because we’re not guilty.”

Allegations brought against Mr Murphy include the false imprisonment of Ms Burton and her staff. A file has been sent to the Director of Public Prosecutions.

“It’s complete nonsense . . . that we’re responsible for the false imprisonment of anybody,” said Mr Murphy. “It’s disgusting in the context that police resources are really needed for people, as opposed to just being used as a political plaything of some establishment politician . . . What’s here is quite a grievous attack on people’s democratic right to protest.”

Also arrested were Anti-Austerity Alliance councillors Mick Murphy and Kieran Mahon, who were released from stations in Tallaght and Rathfarnham in the afternoon. Another, believed to have no affiliation to a political party, was also arrested and released. Files are being prepared for the DPP.

Later in the day, Minister for Agriculture and Defence Simon Coveney rejected claims of political policing. “If someone is trapped in their car for a few hours because people are banging on the windows and kicking the doors, well then the guards will take action and I think that is what is happening here,” he said.

Incident “We have no interest in any further coverage for the kind of protests Paul Murphy was involved in. I can assure you, this is the guards just doing their job and following up on an incident that may well have involved breaking the law.”

Socialist Party TD Joe Higgins said:“Not once in my experience has something like this happened where an incident room has been set up [and] gardaí have been dedicated to investigate a peaceful protest,” he said. “This is unprecedented in the history of policing, and in the history of political protest in this country. “This will outrage people right around the country. Paul Murphy in particular told me he has never been approached by the gardaí, asked for a statement, questioned, interviewed in any way whatsoever since the protests in Tallaght three months ago.”

Sinn Féin leader Gerry Adams said the arrests should have been made by appointment.